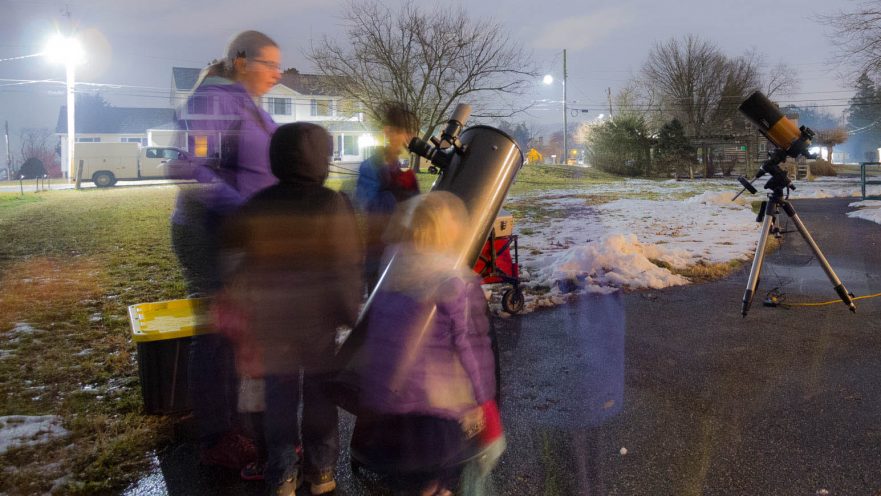 HCAS was invited back to Holt Park in Overlea for another stargazer party this January. Last year Tim P and myself attended their public event to help guests see the Moon, Orion nebula, and some star clusters. It was a lot of fun.

This year was very different. We had a clear sunset and temps above freezing, so I was optimistic for the night. However, as soon as I arrived, I brought clouds with me. The entire evening the sky was blanketed with nearly a 100% cover of clouds. I planned on setting up a dobsonian telescope and a computerized schmidt cassegrain. My hope was to have the cassegrain track the Moon for the evening while I used the dob to bounce back and forth between Mars and the Orion Nebula. Sadly, the cassegrain was never able to start up since I need to see many stars to align it. Thus, we were limited to only the dob since it is fully manual. To make things worse, every time we gazed at the Moon, clouds were blocking most of the light.

It wasn’t a complete bust though. Every parent and child did get to see the Moon and some craters. It wasn’t the best viewing conditions. Details were hard to make out due to the very low contrast and dim appearance of the surface of the Moon. There were moments where the clouds thinned out and some viewers were gifted a brighter, better contrast view, but it never lasted long.

Even with the clouds, everyone had a great time. There were plenty of astronomy questions buzzing around and many kids said they could see the foot prints on the moon. Oh how children like to joke. Holt Park had plenty of activities to do inside. Each child was able to make a few astronomy crafts and help themselves to some stacks.

I look forward to attending again.