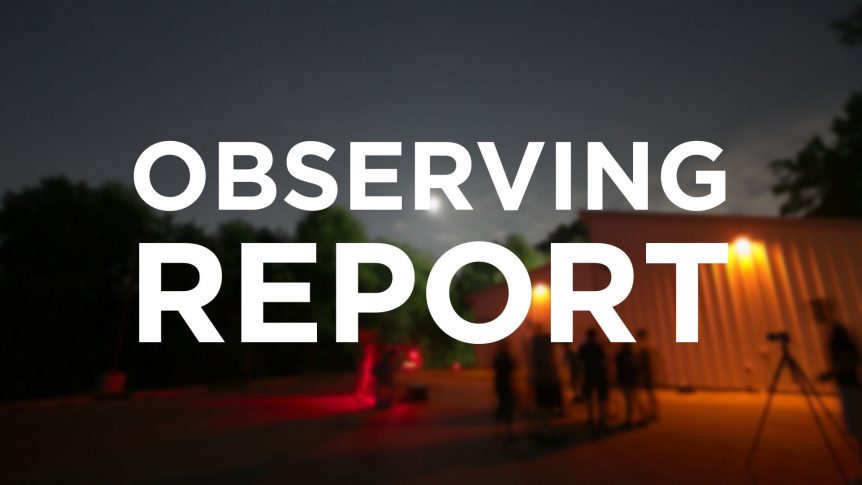 Saint Patrick’s Day fell on a Saturday this year which was advantageous, not for the reasons you may think though. It happened to be on a new moon weekend. Rob Bayne and his wife Laura opened up their house to club members for an Irish dinner and a night of observing in their Jarrettsville backyard. As someone of Irish descent I usually scorn the debauchery-filled celebrations of the average American on St. Paddy’s Day so this was a welcome invitation.

The day began under overcast skies but the forecast was for clear skies and cold temperatures. Right on cue around 5:30 pm the clouds began to break and by sunset we had a crystal clear sky. Rob and Laura served dinner for me before we set out observing. Dinner was a delicious spread of homemade corned beef and cabbage and soda bread. Laura also made Guinness cupcakes which were phenomenal. My contribution to the evening was a bottle of Jameson Black Barrel.

Rob had his 8” SCT set up and I brought the club’s 80mm refractor to do some imaging. We had some of the best skies for galaxies I’ve seen in a while. The humidity was low so the sky transparency was probably a 3 or 4 out of 5. I was attempting to image the Leo Triplet (M65, 66, and NGC 3628) and Rob was able to visually spot all three galaxies with his scope. Ed Wylie showed up a little later on and brought his own scope. Eventually the teenage daughter of one of Rob’s neighbors came out and we showed her some of the constellations and just generally blew her mind with astronomical knowledge.

We observed and just generally hung out until about 1 am when my imaging run had finished. It was freezing cold by then. Rob had observed M65, M66, M105, M81, M82, M42, M97, M106, and the Pleiades. He also managed to sketch M65 & 66 (below) in the freezing cold which is impressive. We had a great time eating good food and being under a clear sky. My images didn’t really turn out due to equipment failure but I’m not torn up over that. Rob and I expressed our desire for the club to do more things like this in the future. Thank you to Rob and Laura for opening their house, it was a great time.