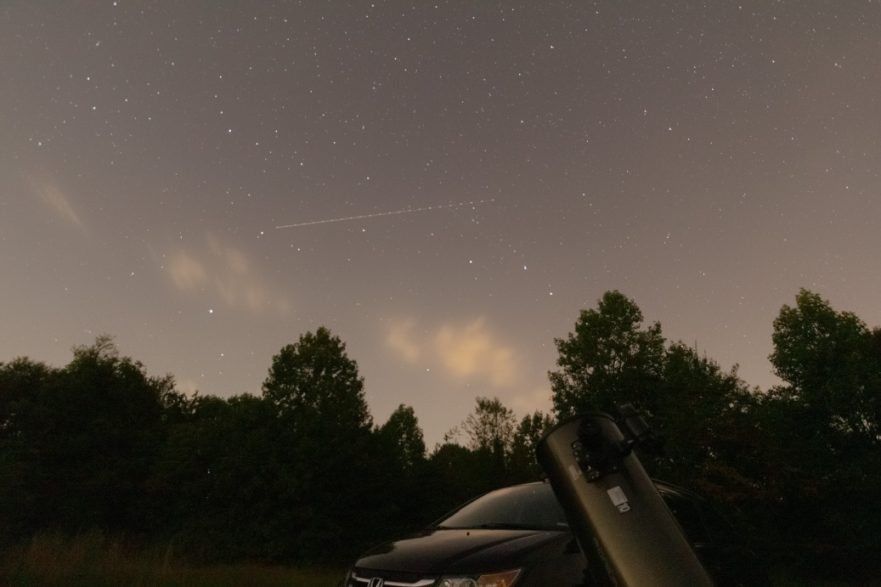 I finally made it to Broad Creek last weekend for a night of observing. It’s been a few years since I was last there. I forgot how great the experience is. It was supposed to be very clear all night. I was pretty excited. As usual, I had a lot of things to get done during the day and did not make it there before sunset like the rest of the gang. Paul, Cathy, and Steve were all set up and waiting when I arrived right went it was dark enough to start observing. I stopped by the observatory on my way and picked up a 10in DOB. So my set up time was basically nothing. After parking, I was observing within about 15 minutes.

So much for clear skies. Right away we all were noticing clouds moving in. Paul called it a night pretty soon. He was getting tired after all the grass cutting he did to prep the observing site for us. Cathy, Steve and I did not want to give up just yet. The clouds were only in certain areas and moving around. So we were able to observe pretty much everywhere, but had to keep it moving around. I ended up finding a good amount of deep sky targets to see, mostly globular clusters, which are my favorite. M51, Double Cluster, M52, M5, M10, M12, M13, M92, M57, M22, M28, M25, M17, M18, M24, M16, M2, M15. All looked very good through the 10in DOB and my 13mm eyepiece.

Partly cloudy observing nights are actually not that bad. If you think about it, all the clouds help hold down the light pollution. They keep a lot of light from reflecting off the higher atmosphere and drowning out your target. As long as you have patches that you can see through, you should have better contrast than a night with no clouds.