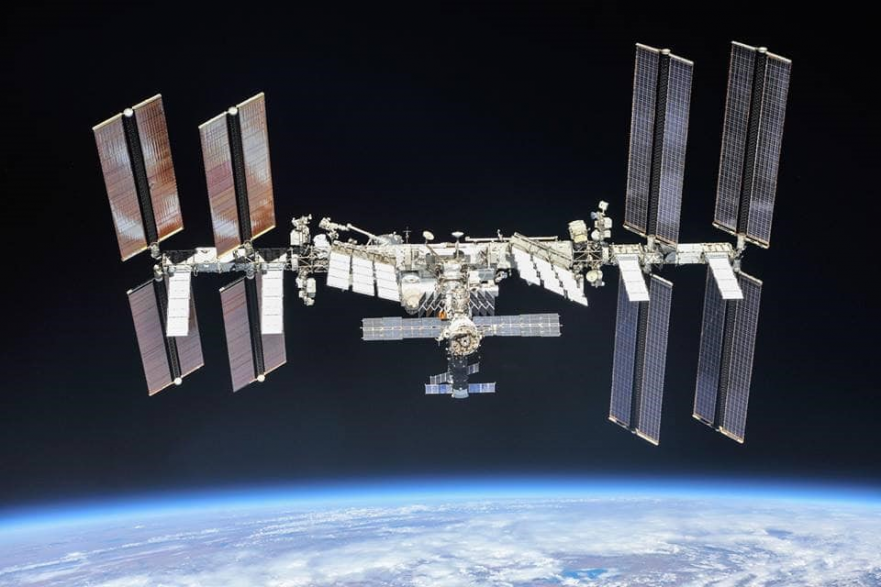 Have you ever tried to photograph the International Space Station? Me either! I mean, I’ve taken pictures of it’s trek across the sky with a wide angle lens, but I’ve never tried through a telescope. The reason is because it moves across the sky so quickly that it’s very hard to track. Unless you know where it will be, and when it will be there. With the help of transit-finder.com, you can do just that!

Transit-finder is a very helpful website for taking a picture of the ISS through a telescope. It’s also pretty easy to use. You might not be aware of this, but the ISS passes through the Sun and Moon every day as seen from Earth. You just have to know where to stand to see it. Just like how the 2017 total solar eclipse would cast the Moons shadow on Earth, and to see it you had to get on that path. An ISS transit functions the same way. The only difference is that an ISS transit happens way more frequently.

The only data that you need to calculate an ISS transit is a GPS location, date range, and how far you would be willing to travel to be on the transits path. Once the site runs the math you are presented with the transits in your area over the next month. There may be a few, or there may be many opportunities. If you are willing to travel 100 km or more, you will have may chances to image the transit. You can also recalculate on a different location that you can pick from the map view. I however, do not have the luxury of traveling far at any moment. So, when I saw that there would be two ISS transits on the same day, within a few miles of my house. I was super excited.

Tuesday morning at 09:05:00.74 the ISS would pass in front of the Moon. HCAS members Bob, Gary, and myself decided to meet at the Essex Back River Community Center because the park nearly fell on the center line for the transit. We set up our gear in the shade next to a tree and focused on the Moon. To my surprise, it was VERY difficult for my to focus my telescope on the Moon at this time of day and position of the Moon. The Moon had extremely low contrast and was buried in a see of blue atmosphere. I tried my very best to focus correctly and then turned to our phones which were running the Atomic clock app so that we could precisely know when to capture the transit since we probably would not be able to see it.

Because of the low contrast, some thin clouds that had moved in, and the transits duration being 2.07 seconds, I decided to take pictures in burst mode rather than record a video. This would allow me to capture 14 bit raw images opposed to the only 8 bit video. The raw images would allow me to push the contrast much further in hopes of seeing the ISS. One second before the transit I held down my shutter button and hoped that I captured the ISS. Bob, Gary, and myself cheered as the time came and went, but we also had confusion as to our success or failure. None, of us knew if we had captured anything! We only stayed around for a few moments before we pack up our gear and went home to wait until the afternoon solar transit.

When I arrived home, I quickly jumped onto the computer to see my results. To my utter dismay I had failed to achieve proper focus! With heavy processing I could see that the ISS indeed passed through right on time and was visible. I however could not fix the poor focus. The ISS is nothing more than a blurry blob.

For those with a more technical understanding I ended up having to shoot some flat files. After I enhanced the contrast to see more detail, I ended up bringing out all the imperfections on my optical tubes front element. Thankfully, I never removed the camera from my telescope and was able to shoot the flats when I got home. The results of adding the flats was a huge improvement. I could have never removed those imperfections with Photoshops tools. I shot 20 flats, applied the same enhancements, and then stacked them in PS to get a master flat. I then opened all the transit images and place the flat on top of each of those images. Set the blend mode of the flat to division and had to change the levels a bit to make those donuts disappear! 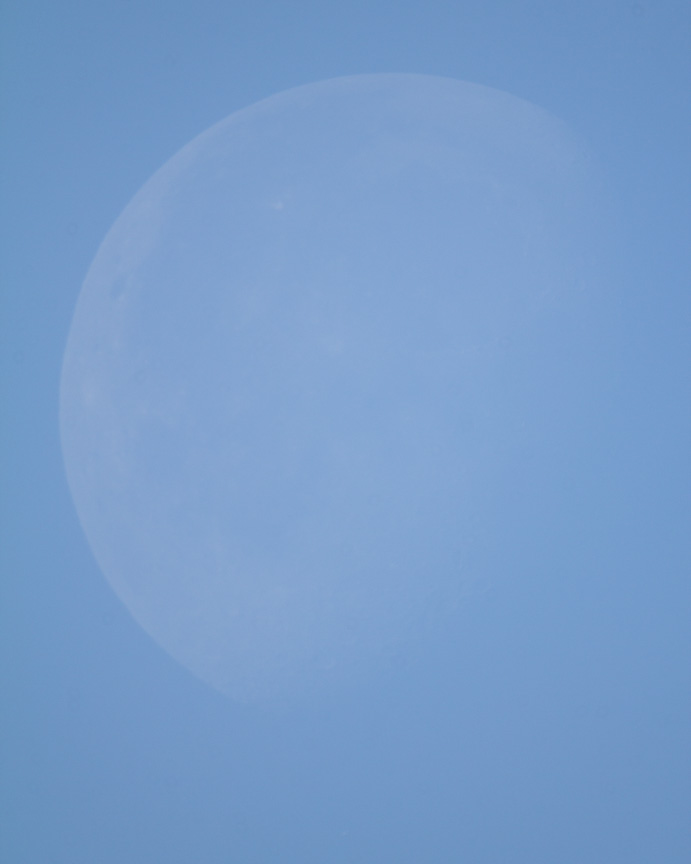 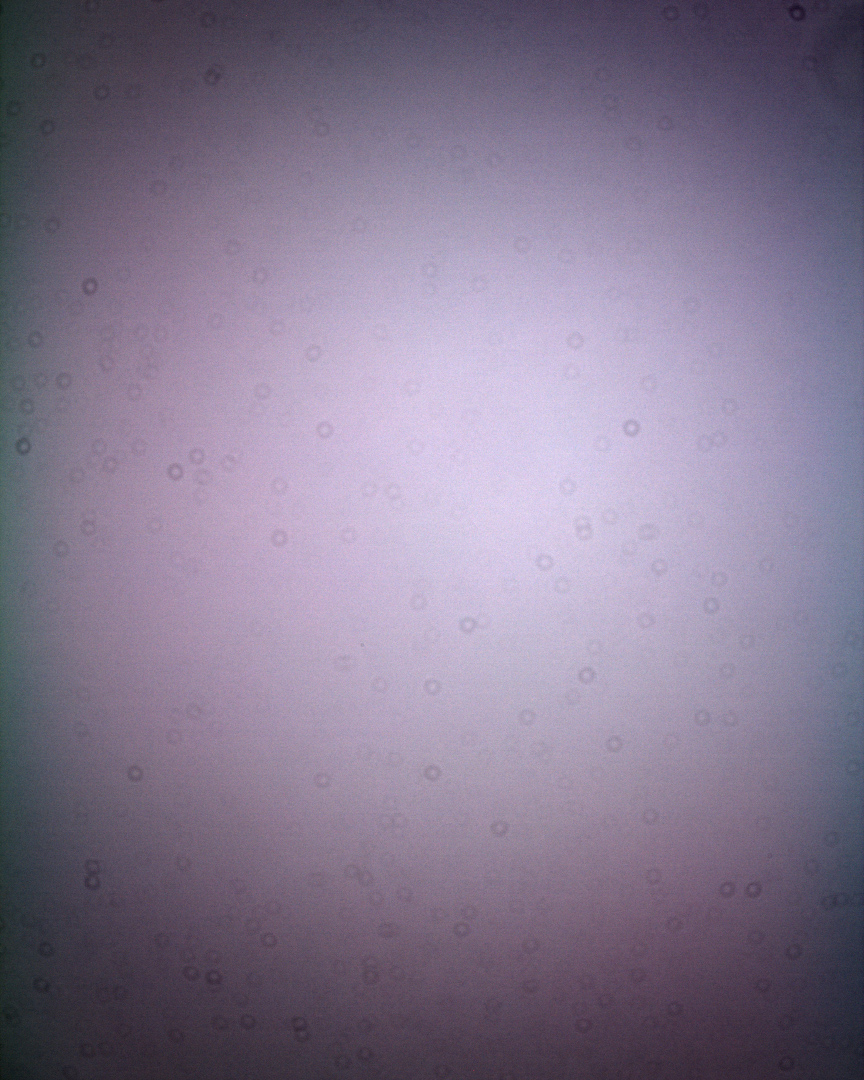 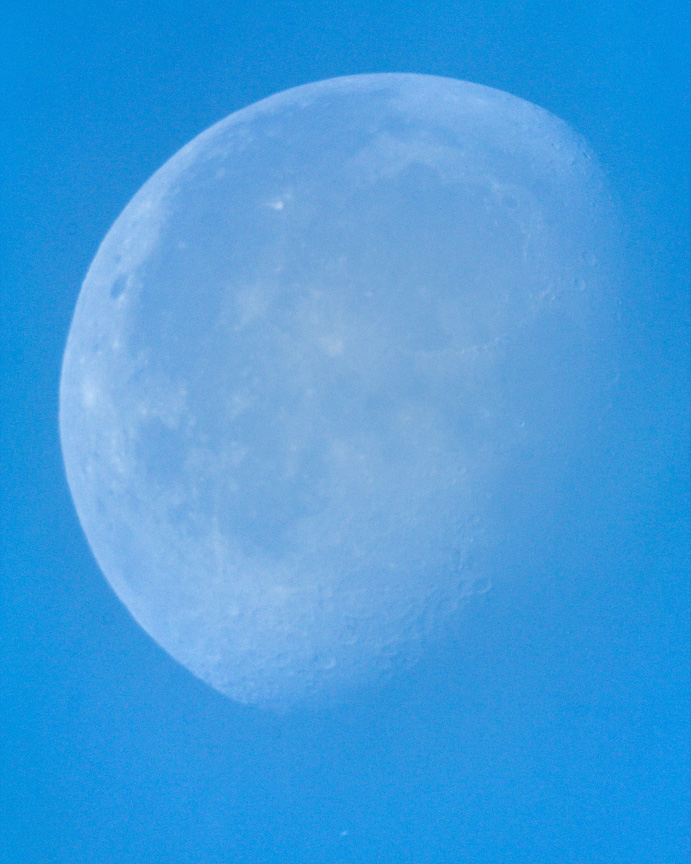 Even though I did not succeed very well with the Lunar transit, I at least knew I was on the right path and should do much better with the sun. The solar transit was going to happen a few miles away from where we set up in the morning. We all arrived around 2 PM at Eastern Regional Park in Middle River. Setup was nearly the same as the morning except we all needed our solar filters! Because the sun is so very bright against anything around it, it was extremely easy to focus this time round. I also brought my laptop for review. This way I could be sure everything was in focus and working before the transit. I would only have 0.70 seconds to get it right this time!

I was too afraid to take raw photos this time. My camera only captures 5 frames per second which would only give me about 4 to work with. So I went with video. My camera can do 1080P video at 30 fps. Because this is not raw and is instead only 8 bit, there is not much processing you can do afterwards. So you need to get your camera settings correct at the start. I increased the contrast and sharpening to the max setting and also put it in grey scale since my solar filter is a white light type. Most importantly though, I made sure my shutter speed was very fast. I was able to capture the video at 1/1000 of a second and at ISO 100! You need the shutter speed to be very fast since the ISS is moving very fast. If I had shot at a standard shutter speed of 1/60th of a second, every frame would have a motion burred ISS.

One minute before the transit I began recording video. I was able to watch the video on my camera screen and was excited to see if I could notice the ISS zoom through. To my delight I saw it pass right through live! It was very exciting to see and know that I had just captured it. As expected, the transit was right on time and the path was exactly what was predicted. Below is the video and audio captured during the transit. Notice how fast it is moving. Remember to shoot with a fast shutter speed!

The whole experience was amazing. I can now say I am hooked on capturing these transits. I will be paying much closer attention to the transit-finder.com website now that I know how to succeed. 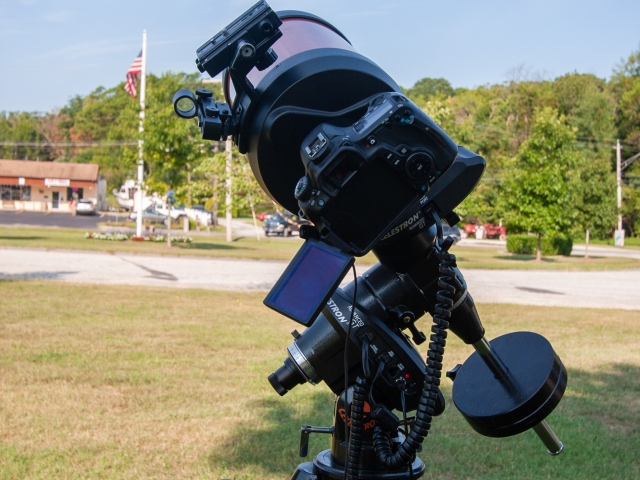 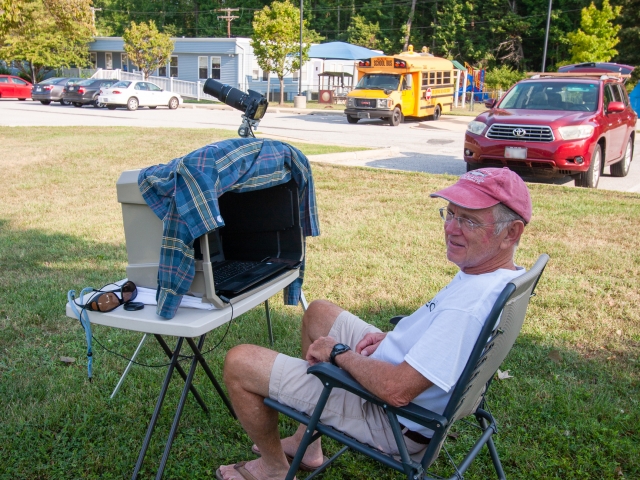 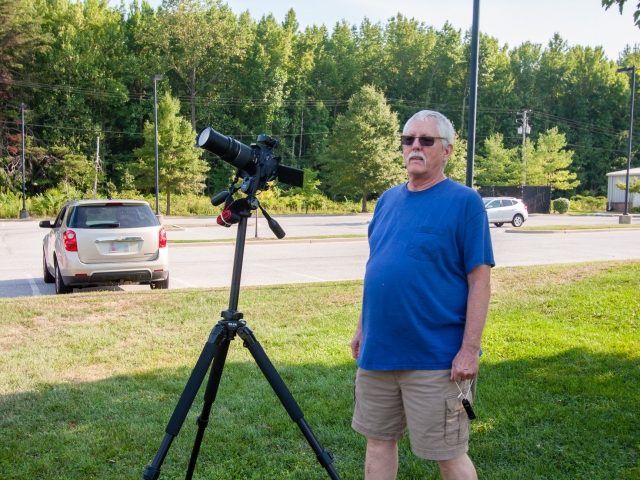 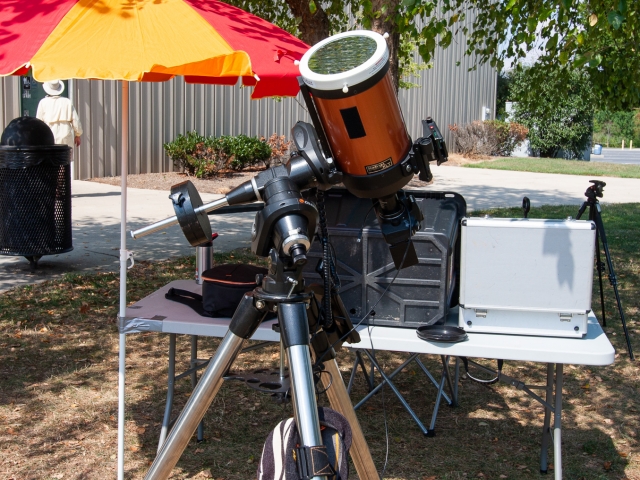 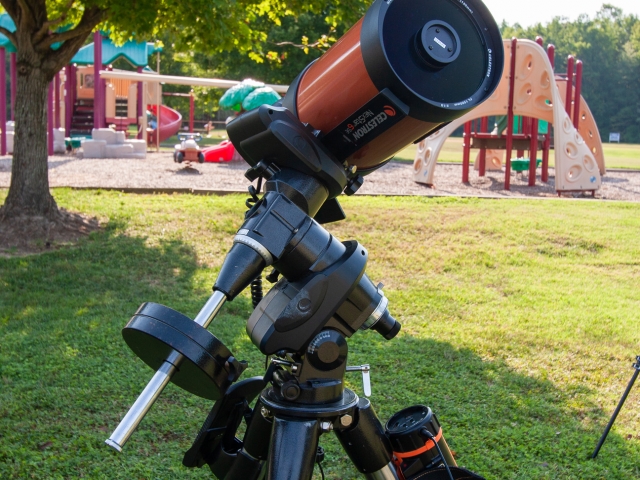 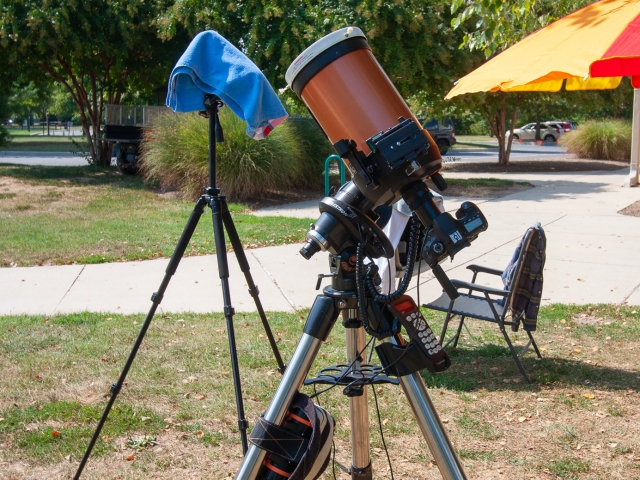 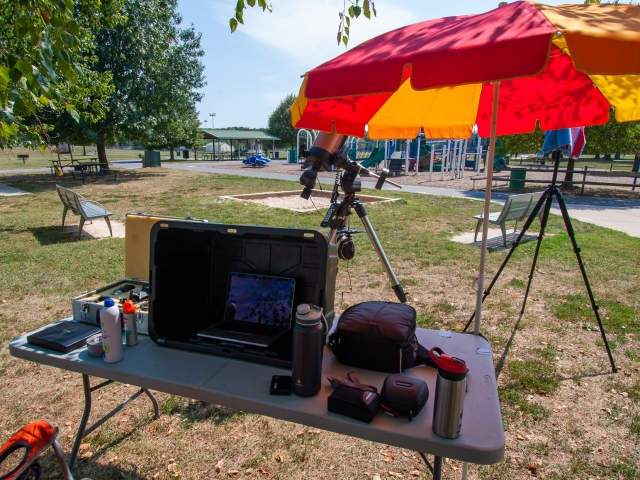 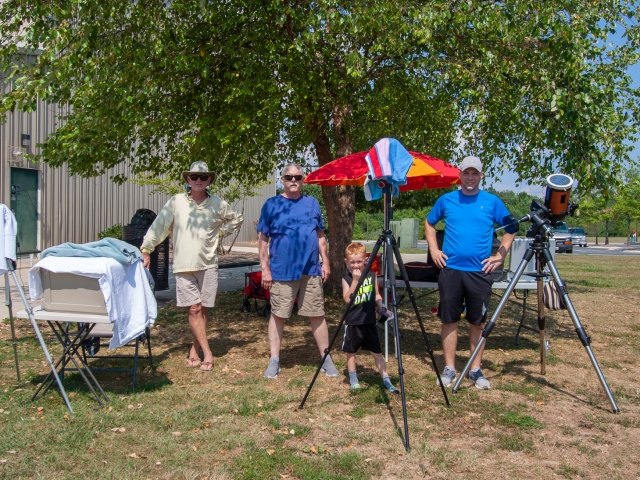