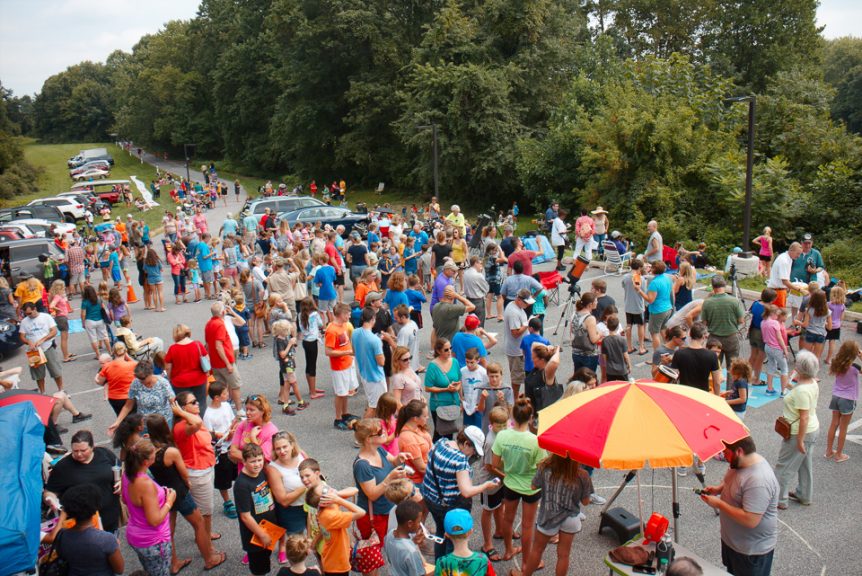 At the observatory we held an amazing event that was attended by over 1000 guests all eager to view the eclipse and enjoy astronomy during the day. We had two live streams of the eclipse from different locations in the USA going in the classrooms . Laura did a great job holding down the fort, handing out hundreds of print outs, solar glasses, and explaining how to make a pinhole projector. Susan had a great idea with solar projection through binoculars. It was a big hit! Rob was allowing everyone to keep an eye on the progress by having his phone attached to his scope for a live view that everyone could see. Tim K, Karen, Gary, and Joe all brought scopes for everyone to hop back and forth between. Ed answered eclipse questions and helped everyone else out. I spent my time attaching over 200 cell phones to my scope so that guests could get a picture of the eclipse and sun spots. We really put together a pretty good eclipse experience for the community. I am very proud of HCAS.

Boy am I glad we threw a solar eclipse party at the observatory! Two Years ago I had started making travel plans to the path of totality. Everything was looking good until my wife and I realized that she would be 8 months pregnant during the eclipse. Suddenly, the thought of traveling across the country was shut down. As a back up plan, I decieded to have HCAS host an eclipse party at the observatory. I started preparing in June for the August eclipse date. I tried to make a projection box big enough for people to easily see the eclipse. However, the final constructed box did not create the results I had hoped for. The projected sun was only the size of a pea. So I ended up not using the box. I contemplated doing binocular projection instead, but feared that it would ruin my binos. So that was scrapped. In the end I decided to get a cell phone adapter so that I could help guests take pictures through my scope.

On the morning of the eclipse, I arrived at the observatory and found that I was not the first person there. I was greeted with scopes already up and running! And not long after arriving even guests began stopping by to see when we would get started.

I set up my gear at the top of the parking lot and made sure that by the end of the eclipse, the observatory would not be blocking my view. I brought my scope, solar filter, table, cameras, tripods, and even a fan and beach umbrella. I ended up greatly appreciating the beach umbrella. Standing in the sun for over 7 hr straight was brutal. There were times when I was completely covered in sweat. But that never bothered me after I saw how many people were pouring down our driveway! It was a never ending river of people. Laura said we had handed out all of our eclipse glasses very quickly. Many guests that showed up were not so lucky to retrieve a free pair.

The start of the eclipse was unfortunatly blocked by cloud cover. I was beginning to believe we would not see much. That all changed about 30 minutes into the eclipse. The clouds disappeared and we had crystal clear skies. Guests began lining up around my telescope once they saw that they could get a picture with their cell phone. I worked very hard for the rest of the eclipse. Cell phones just kept being place into my hands. Thankfully the Carson HookUps 2.0 that I was using is a very fast adapter to get a phone in place over your eyepiece. I did however, take a 10 minute break during our point of totality to get a few pictures for myself. I used my Canon 60D and connected it to my telescope. I also grabbed one more image just before the eclipse ended so that I could see the sun spots that were present that day. Those images are displayed below.

When the last guests had left, we began to pack up for the day. All of us were exhausted from working very hard for our guests, and also being in direct sunlight for so many hours. I was very proud of the members that helped so passionately.