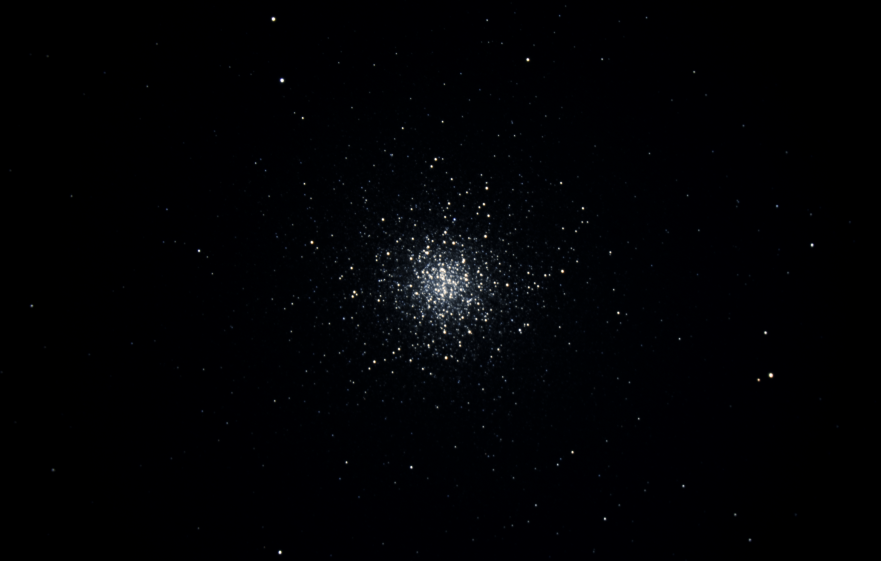 The other night I had the amazing opportunity to use the dome with Rick and two other members. When I was younger I always wanted to use an observatory. I never thought that would happen until I am older, but thanks to HCAS it has already happened.

After Rick had finished taking amazing pictures and a video with his drone, I headed up to the dome with two other members. At that point it was around 9:00pm and it was still too bright for observing; which is the one thing I hate about this hobby… we have to wait until it’s dark to do stuff. It also doesn’t help that it almost never feels like it’s dark enough around here due to light pollution. Although it was too bright, we were still able to make out of couple of objects, including the globular cluster M13. By the end of the night, M13 would be my first deep sky object imaged.

Just as it was getting dark enough to observe, Rick helped me set up my camera for astrophotography with the telescope. He showed me all of the settings that needed to be changed in order to shoot good images. It also showed just how wrong I was trying to shoot astrophotos before. Rick showed me how to focus on the stars and take test images before actually imaging M13. When everything was set up for imaging, the time came to point the telescope to M13 and finally take my first astrophotos. The camera was set to ISO 1600 with an exposure time of 30 seconds for each image and about 28 exposures in total. And with a push of a button the exposures started. While the camera was imaging, Rick explained the importance of taking multiple exposures and stacking them in order to reduce the noise (which is something I tried to ignore in the past, but will not anymore). He also expained how noise appears in the images we take, which is another thing I absolutely had no idea about. It really is amazing how much you can learn by being around certain people for just a couple of hours.

After the exposures were done I was very happy with how they turned out and couldn’t wait to stack them and create my very first astrophoto. But the night was not done yet. After my images were taken, we pointed the telescope to a variety of other targets including Jupiter, M51 (Whirlpool Galaxy), M57 (Ring Nebula), Dumbbell Nebula, and another globular cluster. I was absolutely amazed with how each of them stood out in the eyepiece compared to my telescope at home.

I had so much fun that night was amazed with how everything turned out. I can’t wait for the nights that lie ahead with HCAS! I would also like to thank Rick for his huge help with all of this. Without him I would’ve never been able to do any of this. So, thank you for your help along with the other members that were along with me. It’s amazing to talk to have people to talk to about astronomy!

Thank you for reading!