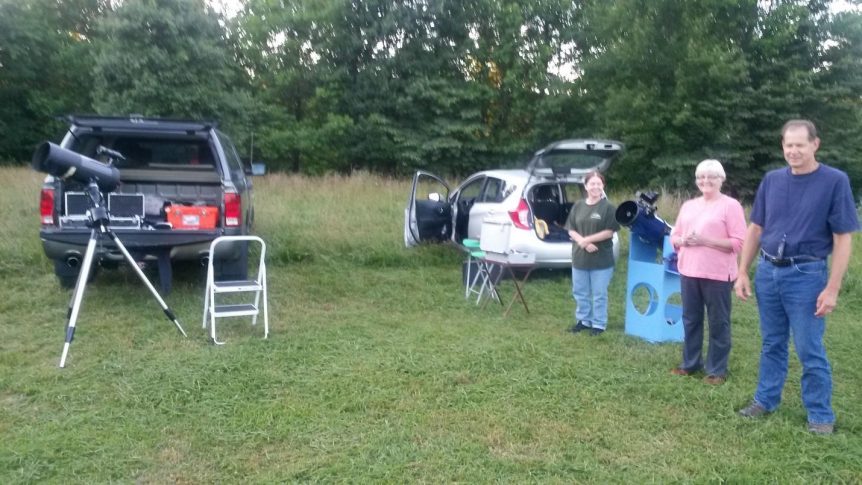 The official gate time was 7:30. I had arrived at 7, wanting to get the gardening done before gate time. I’m glad I did.

The only problem with going to Broad Creek this time of year is the waiting for darkness. Fortunately, even at 8:40 there were some stuff to view. The moon, already deep in the west was a sliver of a waxing crescent. Lots of earth shine. Venus was very high in the sky and, to my eyed, was showing about 80%. First looks at Jupiter were, by consensus, “watery”, though all 4 moons were visible, with Io ready to pass in front of the face. Not great viewing but plenty to get the Telrad-Finder-Main aligned.

Mostly, just for the hell of it, I decided to try the Ring first, just to see how much light was still in the sky. Surprisingly, it was very visible, considering.

Next on to M4, next door to Antares. Again, pleasantly surprised.

Waited for a while before putting M81 and 82 I the same field of view. Never disappoints.

Next, I wanted to check out something that I had been noticing on Stellarium. With each new version I have downloaded, I noticed more and more DSO’s being given names to go with their numbers. I though that rather odd and wondered who’s making these things up. So, I thought I’d look at a few. I did a star alignment on Vega and Polaris and off I went.

My first stop was at M71, the globular in Sagitta. It is now labeled as the Angelfish and/or Arrowhead cluster. OK. Owing to somewhat semicircle of stars, I can see Angelfish but not Arrowhead.

Next was NGC 7160, irresistible because it is now being called the Swimming Alligator Cluster and /or the Bruce Lee Cluster. Huh? Anyway, I see the Tadpole Cluster. Who’s making this stuff up anyway?

At this point, I unfortunately started getting encoder errors again. I spent some time trying to check connections and restarting several times but no go. I’m consistently seeing the AZ encoder “offline” To dark to fix it properly; must do it at home if at all. Back to old school finding.

Back to Jupiter for a few more looks. Very bright.

M13 was almost straight up at the zenith so I thought to go there. I don’t remember ever trying it straight up; sometimes difficult with the big dob. Glad I did. Best I’ve ever viewed it. Put some rather high magnification on it with a 15mm and was rewarded with the best detail of it ever.

For comparison, I jumped the short distance to M92, another globular, for comparison.Nice sharp detail but just too small. Just not fair to look at it right after M13.

Decided to finish up the nigh with some galaxy hunting in Dipper territory. Again, rather high in the sky so I was hoping for good clarity.

Not disappointed. With M51, both cores were visible easily. By the way, the Whirlpool Galaxy is apparently now also known as Rosse’s Galaxy and/or the Question Mark Galaxy. Isn’t this all going to get quite confusing?

M101 is always a tough one for me. Big, face on, and wispy. Tonight, a much better than average look. The wispiness seamed a lot brighter than usual

Again, chalk that up to high in the sky. All in all, quite a fun night despite the glitches. We didn’t lock the gate until around midnight.