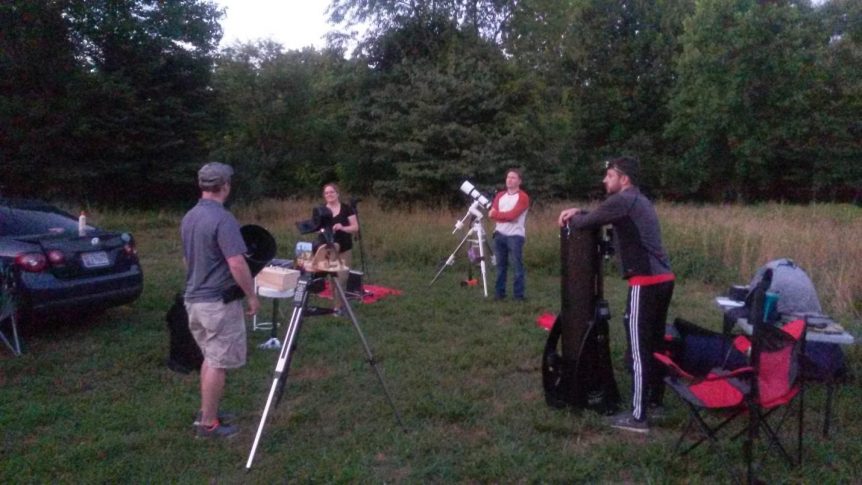 Considering that the weather forecast was oh, so promising, we all arrived at the gate at 730. Since it was to be a five-planet night, we set up quickly and then waited for our first chance to see Mercury.

Venus and Jupiter were the first comers. Venus, to my eye, appeared to be about 75%. I thought it would be closer to 50% since it is reaching maximum elongation, but maybe I’m not remembering what I read correctly. Jupiter was quite clear and bright; all 4 moons showing up nicely. Early opportunity to at least get the main scope-finder-Telrad all line up well.

We knew we would have to walk around the area to find a good spot to see Mercury on the western horizon (at about 10 degrees). After a few walk arounds, Cathy found the perfect place, a little back down the gravel road with a clear shot at the western sky. After waiting a while, Mercury came in to view, naked eye. That’s all for that; check off the box; move on to other stuff.

Saturn was available by then. The Mobile Observatory app on my phone said that we could get 5 moons. Glad I checked. I originally thought them to be background stars, but all five could be seen.

Did my two-star alignment after that. Warp was pretty weak. Did a “go to” to the Ring (quite clear), not too far off. After aligning with Ring, warp acceptable.

While there, satellite Iridium 14 (confirmed on Stellarium) flew past Vega but no flare.

Keeping with my new fascination as to how many numbered objects are getting names on Stellarium, I did a “go to” to NGC 7160, which apparently is also now known as the Bruce Lee Cluster. OK, so one part of it might look like a leg, cocked 90 degrees at the knee, doing a kick. Yeah, sure. Who is making this stuff up and why is it getting recognition on Stellarium???

At that point, Tim was looking at M4 and wanted me to check it out also. He noticed (and I saw it too when I panned over there) that part of that globular was appearing as a distinct straight line of stars from top to bottom. Visually interesting. Oh, by the way, that cluster is now also known as the Crab Globular Cluster or the Spider Globular Cluster, neither of which makes any sense to me.

I wanted to check out some of the lesser galaxies around Ursa Major, so I zipped around to M81 and M82 to check out how galaxies would be tonight. Got both in the same field of view. Very clear.

Tried for the Owl Nebula but just could not see it at all. I know I was in the right place because it’s right next door to M108. Just couldn’t see it.

At that time, Tim was doing M24 and said he saw something a little unusual within the cluster; a dull fuzziness just outside what we were saying is the triangle of M24. I could see it too. In Tim’s reference book, it was referred to as a “knot” inside the cluster, namely NGC 6603. We went to Stellarium, zoomed in on the view of M24 and sure enough, there’s a cluster in a cluster. Oh yeah, M24 is also now known as the Small Sagittarius Star Cloud or Delle Caustiche. I kid you not.

By then, it was actually getting a little chilly and I was consistently getting dew on the eyepiece, so I started packing up.

The only thing left to do was to wait for a clear view of Mars over the treetops to complete the 5-planet night. It cleared the trees a little after 11. Very, very bright getting real close to opposition. To my eye, brighter than Jupiter. OK, check off that box and time to go home.

We left the gate somewhere around midnight, didn’t check it exactly.It was a very good night.