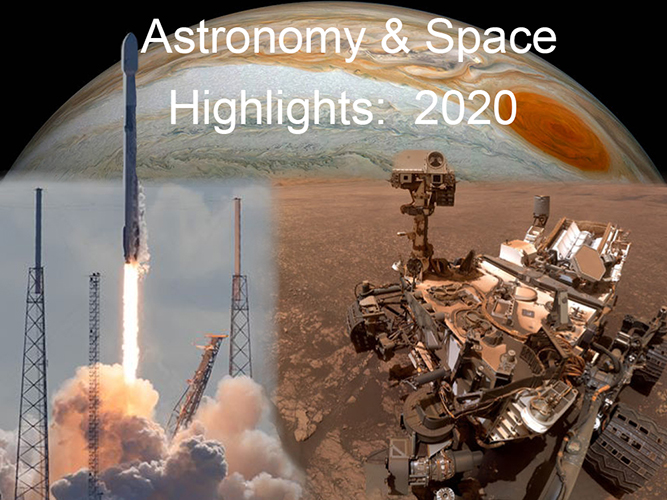 As I’m writing this it is New Year’s Eve 2019 and I’m feeling pensive, which I guess is appropriate for this time of year. The year 2019 was a massive year for space and astronomy. There were some very exciting things that took place since the last time we went around the sun. We had a magnificent lunar eclipse in January, we were shown the first ever photograph of a black hole, there was a total solar eclipse in South America, NASA’s New Horizons flew past Ultima Thule beyond Pluto, Mercury transited the sun and there were some pretty exciting rocket launches. Twenty-twenty promises to be just as good for those of us interested in the heavens. Let’s see what the next year has in store for us.

There are many things I could have included on this list but not all will be visible to those of us in the Mid-Atlantic so I tried to mostly keep it down to things that we’ll be able to see.

First off we have a very exciting conjunction of Venus and M45, the Pleiades on the evenings of April 2-4. The closest the two will be paired will be on the evening of April 3rd after sunset when Venus will appear to be inside the Pleiades if you look with a pair of binoculars.

June 21st will bring another annular solar eclipse but not to North America. This one will be nearly a repeat of the Boxing Day 2019 annular eclipse cutting across the Africa, the Middle East, and Asia.

The summer and fall of 2020 will be great for planetary viewing. There are three major oppositions in the second half of 2020. An opposition is when a planet is opposite the sun in the sky so it rises as the sun sets and is visible all night. Oppositions are also when the planet is brightest so these are prime observing times. On July 14th Jupiter comes to opposition and only six days later on July 20th Saturn will be at opposition. Then on October 13th Mars will be at opposition. This year will be great for Mars as its orbit is much more inclined relative to Earth than its 2018 opposition. This means it’ll rise much higher into the sky, as much as 55 degrees, so we should get some amazing views of Mars this year!

December 14th brings another solar eclipse but this time it’s a total eclipse, but again not for viewers in North America. This one will be in southern Chile and Argentina for those of you who love to travel. Finally, on December 21st there will be a very close conjunction between Jupiter and Saturn low in the southwestern sky shortly after sunset. You’ll need to view from a place with a very flat horizon in order to see this and bring your binoculars or telescope out as the two planets will be a mere 6 arcminutes apart!

There are a number of exciting things to look forward to in deep space exploration in 2020, some of which I’m calling “deep space rendezvous.” NASA’s Parker Solar Probe which is currently in orbit around the sun will be making three perihelions in 2020. Perihelion is what we call the closest point in an orbit around the sun. Parker Solar Probe is already the closest man-made object to the sun and in 2020 it’ll get even closer. By taking advantage of a close encounter with Venus it’ll lower its perihelion to just 14.2 solar radii from the center of the sun on September 27th.

NASA has another spacecraft called OSIRIS-REx which is currently in orbit around a near-Earth asteroid called Bennu. Sometime in July 2020 OSIRIS-REx will attempt to gently touch the surface of Bennu to collect a sample of the asteroid’s surface. If successful, the sample will be returned to Earth in the next couple of years to allow scientists to study the composition of the material.

In other sample return news, JAXA’s (Japan) Hayabusa2 mission is hoping to return a sample to Earth from near-Earth asteroid 162173 Ryugu in December 2020.

There is quite a lot going on in the world of solar system exploration. This year we’re going to be paying a lot of attention to the moon and Mars. There are four missions to Mars planned for 2020 including three new rovers, two orbiters, and one lander.

This past year saw some amazing milestones in human spaceflight. NASA’s Commercial Crew program met some important milestones. NASA’s two commercial contractors SpaceX and Boeing have flown uncrewed missions of their Dragon-2 and Starliner capsules respectively. SpaceX is expected to fly Demo Mission 2 with astronauts Doug Hurley and Bob Behnken onboard and deliver them to the International Space Station. DM-2 is expected to launch in Q1 of 2020.

Also worth keeping an eye on is SpaceX’s Starship progress. They currently have two sites where their next generation spacecraft is being built, one in Boca Chica, TX and another at Cape Canaveral. SpaceX is expecting 2020 to be a big year for Starship and it’s possible they have an orbital prototype ready to fly by the end of the year.

All in all, there’s a lot to look forward to for those of us who are drawn to the cosmos whether for observation or exploration. May your skies be clear and dark and filled with wonder in the New Year.