Wallops Island, Virginia is home to a relatively well-kept secret. Most people are surprised to know that NASA has a launch pad on Virginia’s eastern shore. The Wallops Island Flight Facility is home to the Mid-Atlantic Regional Spaceport where Northrop Grumman launches their Antares rocket to the International Space Station.

Antares is a two-stage orbital rocket that is capable of delivering cargo payload to the ISS under the auspices of NASA’s Commercial Resupply Services program. Antares launches from Wallops Island twice a year to bring supplies and science experiments to the world’s orbital laboratory. In November Northrop Grumman launched Antares on their 10 th resupply mission, dubbed NG-10.

The facility hosts public launch viewing from the visitor’s center and there are also a couple of private places where the public can view from. The facility is only a three hour drive from Baltimore so it’s basically the same as a drive to Ocean City.

On November 17 th , 2018 (thanks to several days of weather-related scrubs) NG-10 launched from Wallops Island. I was fortunate that it was on a Saturday morning because the liftoff time was a harrowing 4:01 AM EST. I made the drive down to Wallops on Friday night around 9:30 PM with a rented camera and lens in hand. I had rented a Canon 6D Mk. II and a Zeiss 15mm f/2.8 lens to try and capture a long-exposure photo of the rocket flying to space.

The spot where I was to view the launch from was a little peninsula jutting out into the bay between the mainland and Wallops Island merely 3.5 miles from the pad! That’s closer than you can get to any launch down at Cape Canaveral! I arrived around 12:30 AM and began to set up my two cameras and 80mm telescope. It was a clear, moonless night so obviously I took some Milky Way photos with Orion and Canis Major in the south with the rocket being illuminated on the pad beneath. From 3.5 miles you can clearly see the 40 meter tall rocket with the launch clamps and even the oxygen vapor being vented out during fueling.

If you’ve never seen a rocket launch in person before my advice to you is simple: GO TO ONE! Words are inadequate to describe the feeling of excitement, suspense, danger, and relief you feel during the whole experience. Then there’s the sight and the sound! O the sound! The countdown reaches zero and you see a flash of light in the dark as the two engines roar to life and the dark sky is set ablaze from chemical fire. You see the smoke billow out from the engine nozzles and as the thrust from the engines ramps up the rocket finally lifts off from the ground. The weird thing is that all this happens in total silence. The rocket is still 3.5 miles away and the sound has not yet reached your ears and so the first thirteen seconds of the flight happen in silence (apart from the cheering and clapping of others around you). When the sound finally reaches your ears it begins as a faint rumble but quickly crescendos into a crackling cacophony of thunder. It’s as thousands of thunder claps are all hitting your ears in quick succession. The roar of the engines quickly overwhelms you and you can actually feel the sound waves hit you as they patter against your ribs. By this point the entire sky is ablaze in orange light as if you’re standing in the sunlight on a distant planet around an alien sun. The rocket climbs higher and higher and gradually pitches towards the southeast out over the Atlantic Ocean as it builds up horizontal velocity.

The flames from the engines are visible the entire way up to space.
At around 4 minutes into flight the first stage engines burn out and the rocket stages itself to shed mass. You see the light go out above you and a few seconds it re-appears as the second stage engine lights to hurl the payload into orbit. The second stage burns for about two more minutes until it is high enough and traveling fast enough to achieve orbit. At that point the faint glow of the rocket disappears and those on the ground await the callout of a nominal orbit achieved.

This was my third launch experience at Wallops and I was hooked after the very first one! Like I said, words can’t satisfactorily describe the experience. You simply must experience it for yourself. The next launch attempt of NG-11 is scheduled for April 17th , 2019 but you know how these things go…that’s a no-earlier-than date. I will be going and I would love for anyone else from the club to go. You’ll not regret it! 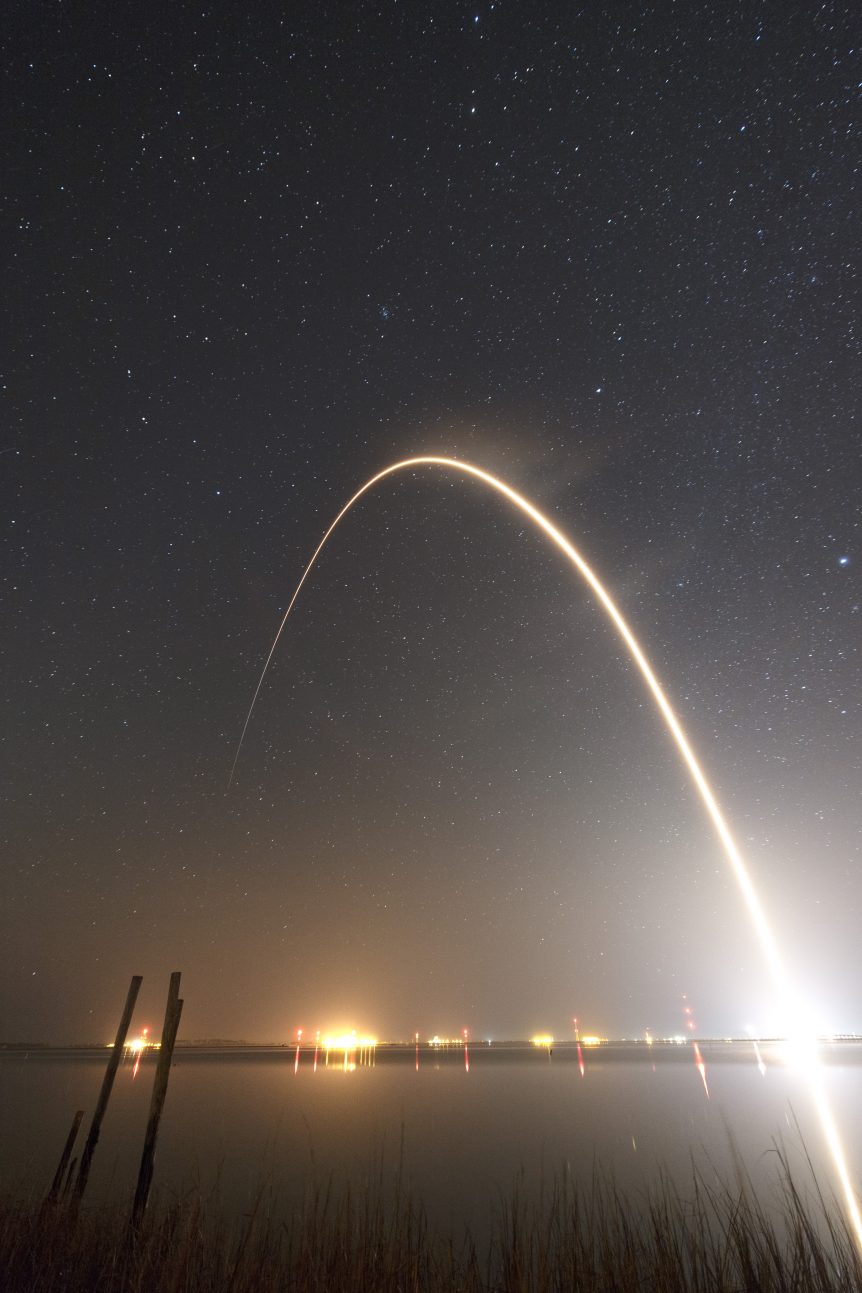 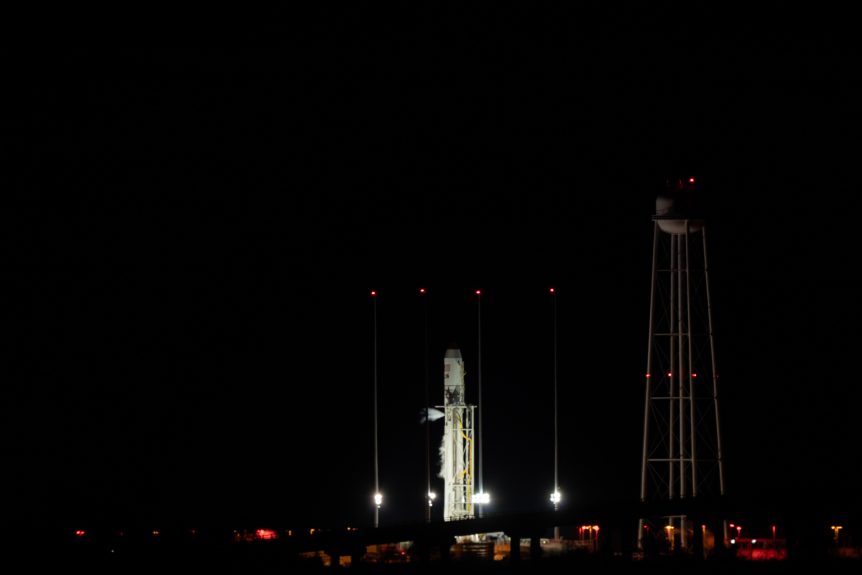 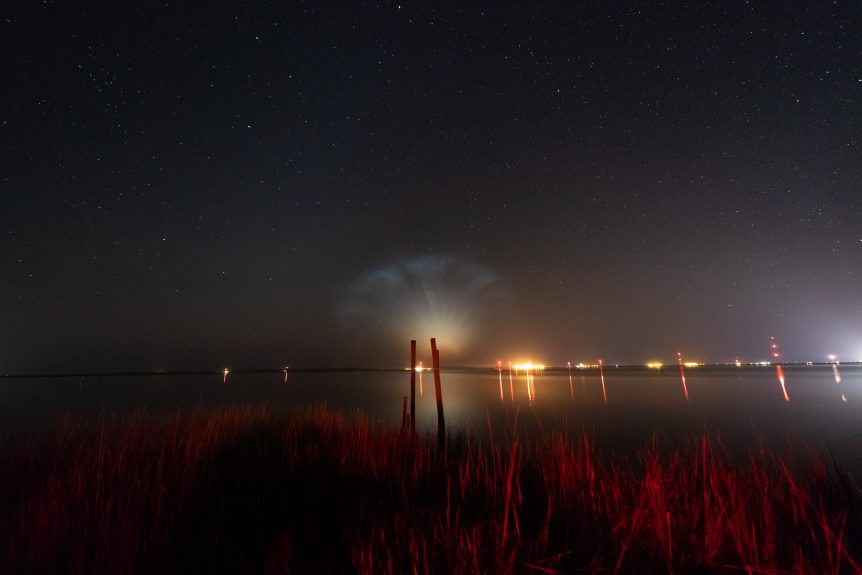