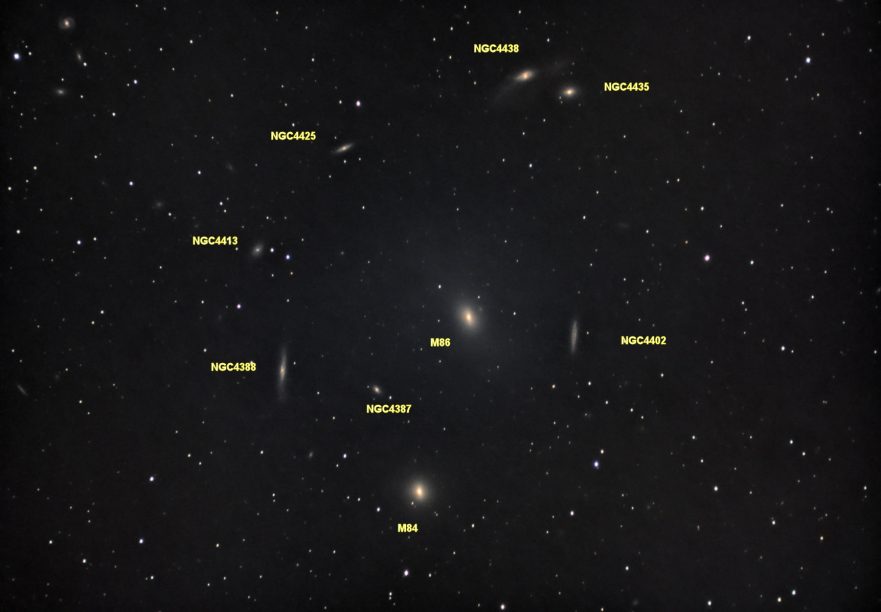 Clear nights in the winter in Maryland are few and far between, so when I saw that things were supposed to clear up around 10 PM Saturday night, I took a gamble and set up my gear early in the evening under the clouds. Then I crossed my fingers hoping that I would get an opportunity to play later that evening. Fortunately, the weather channel app proved accurate and I got my wish!

I have been active in the hobby since about 2003, and enjoy both visual observation and astro-imaging / video. Last night was an imaging night. My gear included a 100 mm, F8.8 ED doublet refractor, a 0.5X Focal reducer, and a ZWO ASI 294 Pro color camera was my main imager. The site was my backyard in town where I have a semi-permanent GEM mount on a pier. The imaging was carried out using short duration exposures (<1 minute) and no guiding. Image sub exposures were stacked and aligned in the program, Nebulosity version 4, and the rest of the image processing was done using Startools, Astraimage Plus, and Corel Paintshop pro.

Given the late hour, I chose as my main target a collection of galaxies in the constellation of Virgo known as Markarian’s Chain. This group is a curved line of galaxies, most of which share a common motion through space (a fact first identified by Armenian Astrophyscist, Benjamin Markarian. Thank you Wikipedia!:-). Last night I was able to capture the portion of the chain centered around Messier objects M84 and M86 as seen in the Figure 1.

The image in Figure 1 is a stack of 40 second exposures (41 total) for a total exposure time of 27.5 minutes. The subs were captured as 24 bit RGB images saved in a PNG format. Images were processed as is, with no dark subtraction or flat field and bias correction. Most of the processing was carried out using Star Tools, where the Baltimore light pollution was mostly removed using a gradient wipe tool and the raw stacked image was cropped, color balanced, and finally subjected to a noise filter to screen out the worst of the noise that comes as a by-product of using such short exposure times. This process I have outlined is a quite abbreviated approach to traditional image processing workflow, but the end result is a quick and dirty snapshot of the cool thing I was looking at in the sky the night before. I think of it as photo tourist astronomy. There are actually quite a few more smaller galaxies in the image that I have not labeled, particularly in the upper left hand corner. They become more apparent if you invert the color scheme as I have done in Figure 2.

By 1 A.M. it was getting very cold and my fingers were quite numb, so I was thinking of closing up shop when I noticed that the Moon had come up over the tree line. I figured I might as well grab a few quick shots before packing up, so I slewed the scope around to the moon. It looked so beautiful on the screen, with just the barest hint of atmospheric ripple. I snapped about thirty images with an exposure time of 1.2 milliseconds each, and then packed it in for the night. Figure 3 shows a stack of ~5 of the best images, stacked and color balanced in Registax and sharpened a bit with a Guassian deconvolution filter in AstraImage Plus.

By this time frost was covering parts of the pier, so I just covered the lens, shut the power down and left things to warm up slowly in the next morning, before bringing them it. All in all a grand evening under the stars! There is a lot to see in the sky, even with the severe light pollution around here! It is great when winter gives us a break ☺ I am hoping to get out again this coming weekend!