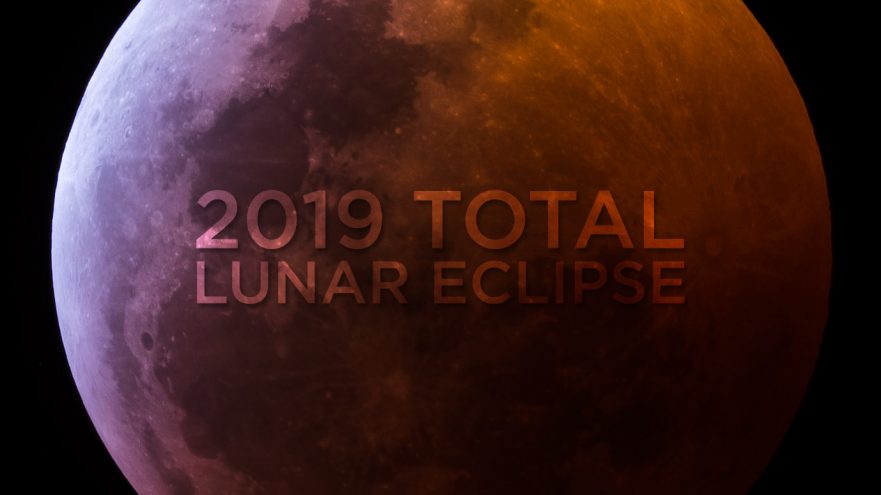 I sure hope you had the chance to view this eclipse because it was beautiful. If you didn’t, don’t worry, there will be more. You just have to wait until May 15, 2022.

This was my second total lunar eclipse that I had the chance to witness. My first was back on September 27th 2015. I spent that night in my back yard amazed at how dark the Moon was during totality. I used my telescope to take a lot of images and also sit back and observe the celestial event.

This time was quite different. Instead of staying home in the back yard I decided to join several other HCAS members at the observatory to observe and image the eclipse together. Most of us arrived between 5 and 7 PM. We knew it was going to get very cold and there would be strong gusts of wind during the entire night. This prompted us to set up in the grass outside the observatory classroom instead of the parking lot. The grass area is protected from the wind on three sides by the observatory itself. Thankfully the Moon was going to rise very high and would not be blocked my the trees surrounding the observatory. This was also going to cause two of our telescopes to be unable to photograph during totality. More about that later.

I started setting up my equipment around 6:30 PM and didn’t actually get up and running until around 9:30 PM. Usually it only takes me about 45 minutes to get up and running. However, I was enjoying the company and helping everyone else with get ready. Once my scope was aligned and ready the first thing I made sure I did was to set the tracking to Lunar rate. Usually a tracking mount is set to sidereal which moves at the speed of Earths rotation. This will allow to the scope to track stars and deep space objects at the correct rate of motion across the night sky. This however, does not work with observing the Moon for a long period of time. The Moon is in orbit around Earth which causes it to move at a different rate. If I had left the tracking set to sidereal, the Moon would slowly be moving out of view. So this was a very important step, and one that quite a few owners of telescopes forget to change. Thankfully, before the eclipse began, all of us made sure we were set to Lunar tracking.

I decided to attach my camera to my telescope and leave it there for the duration of the eclipse. I wanted photos throughout the eclipse and for them to all be aligned with no rotations or movements. This meant I had to keep the camera on without removing it. Thankfully, since we were at the observatory we all had access to other telescopes that we could use to observe the Moon at high power.

The first thing I noticed as the eclipse began was how bright the Moon was. My exposures were half the time they usually are, telling me the Moon was much brighter than normal. Since we were about to move between the Moon and the Sun we were lined up in the path where most of the reflected Moon light travels. Most of the light that strikes the Moons surface actually reflects straight back at the Sun. So if Earth moves into this path the Moon will appear very bright.

About this time is when the Alt-Az telescopes could no longer take pictures. The camera ends up running into the base of the mount when the optical tube is pointed high. Rob decided to put an eyepiece back on and use his phone to get some shots. Gary grabbed his 70-300mm lens and attached it to the side of my telescope. I have a bracket that allows this. This enabled Gary to continue taking photos and have tracking during totality when you need to really increase your exposure. My telescope mount is an equatorial design. This allows cameras to be attached and never hit the mount. Because Gary’s camera was also attached to my telescope we had to make sure we were not changing camera settings while the other was taking photos.

When we arrived at totality there were three of us trying to get take pictures while using my telescope for tracking. Gary took his and then we removed his camera so that Emily could attach hers to get some 15 second exposures. Meanwhile I was shooting away at 945mm and taking a variety of different exposures times.

I made sure to step back and look up during totality. It truly is a unique sight. It’s strange to see the Moon so dimly lit and surrounded by stars and a black sky. Usually when you observe the Moon it’s blinding bright, surrounded by a hazy glow and nearly all stars around it are drowned out by the glow. The eclipse changes all of that and gives you a very interesting sight. It really allows you to see that the Moon is just floating out there in the universe. Just another body in an endless sea of stars. After totality Gary placed his camera back on my scope and the two of us snapped off images until around 1:45 AM.

During the entire event we continued to be hit with gusts of wind and freezing low temperatures. The observatory itself did help a lot in blocking or slowing the wind and we were all very well dressed for the occasion. However, standing still in that weather will still get you cold after a few hours. So it was a real pleasure to duck into the classroom to warm up when needed. We all brought food and drinks to snack on and Tim was able to put a playoff football game on the projector. There was plenty of telescope and photography talk to go around the entire night. It was a great time had by all.

It looks as though the next total eclipse will be in May of 2022. Place it on your calendar and plan to observe and image from the HCAS observatory next time. I know you’ll enjoy the night.

Below are some of my favorite photos from the eclipse. 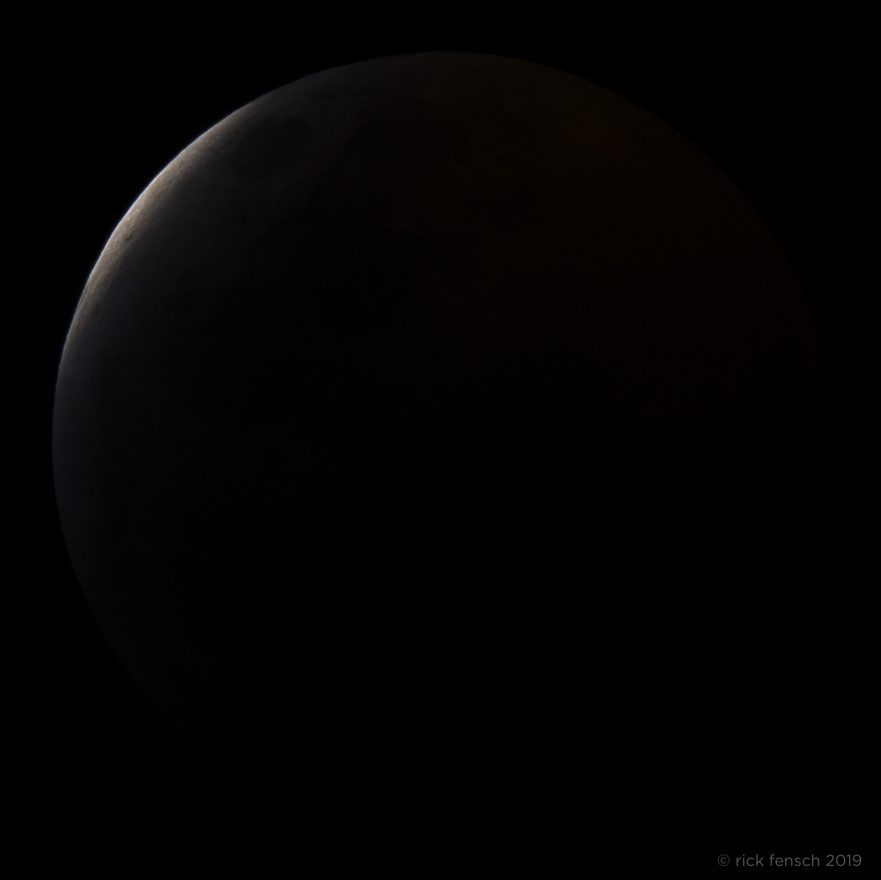 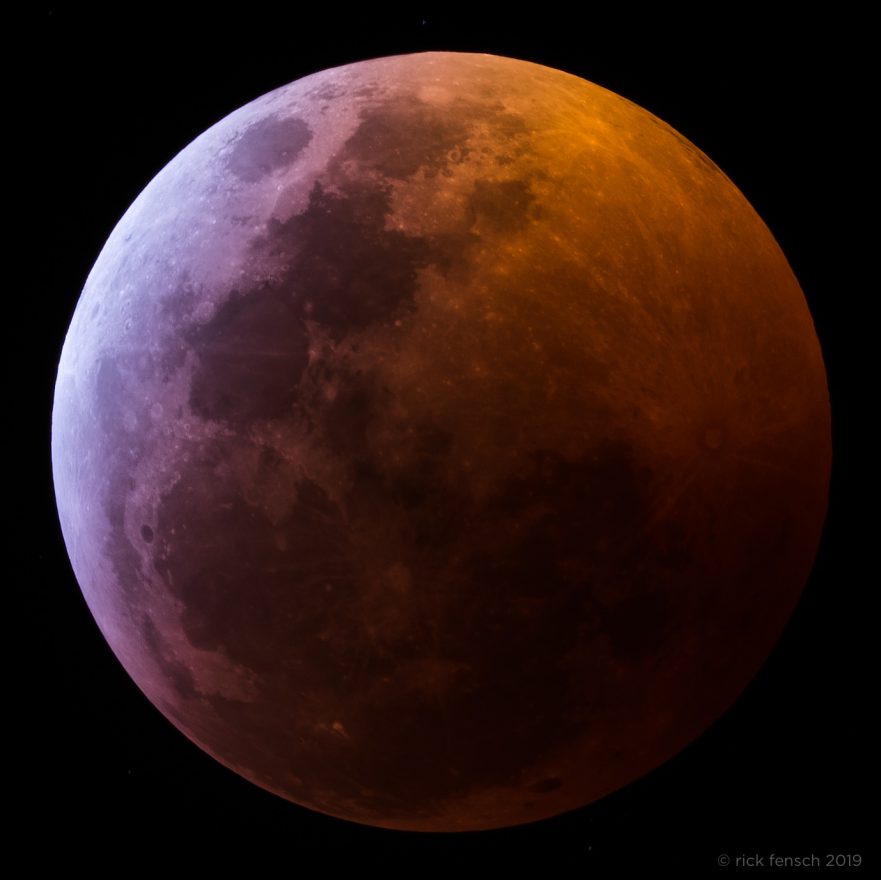 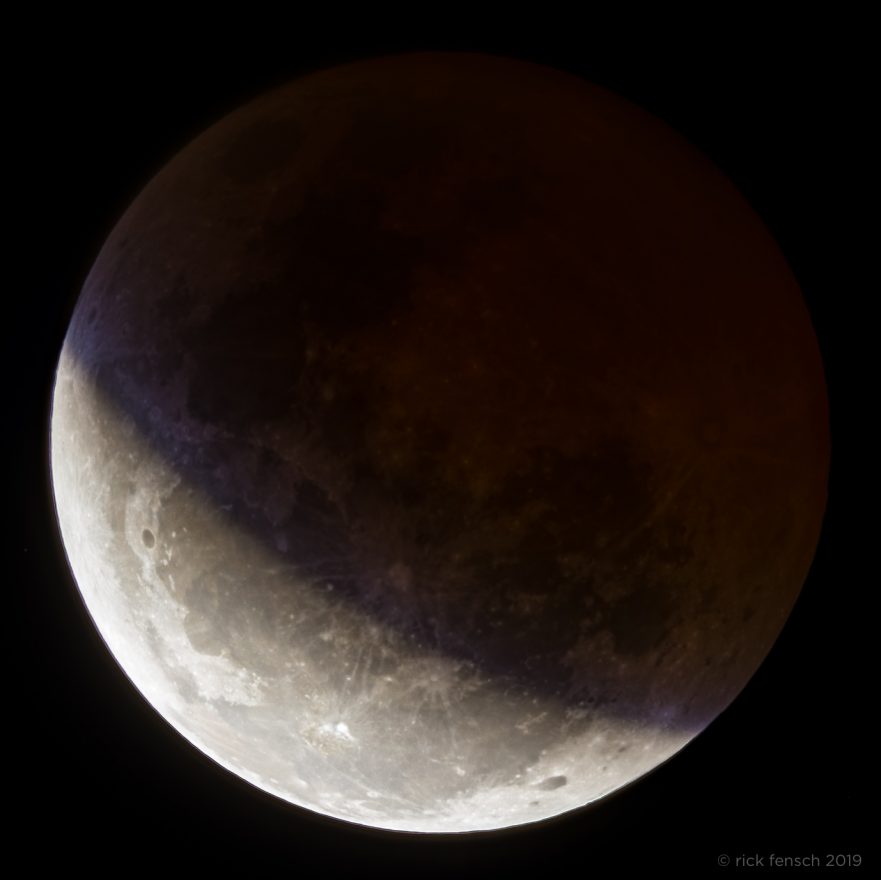 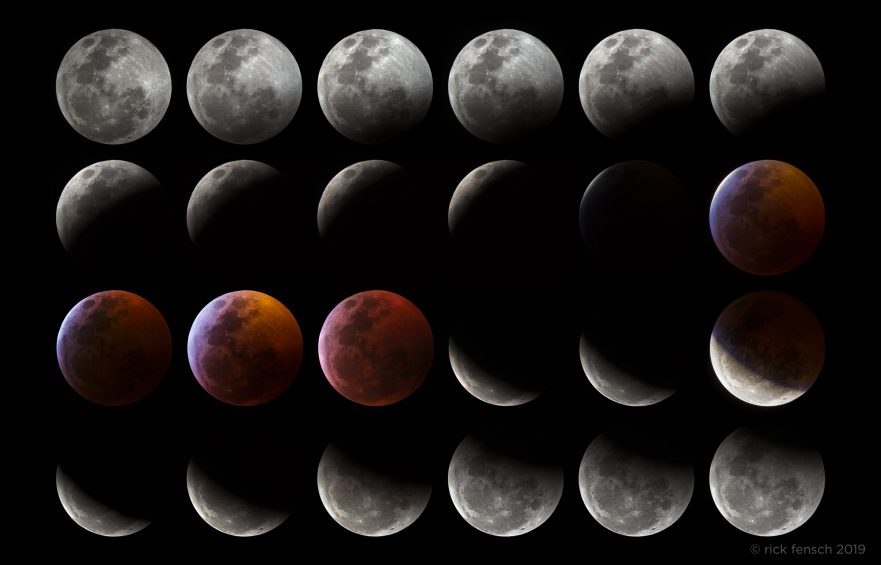 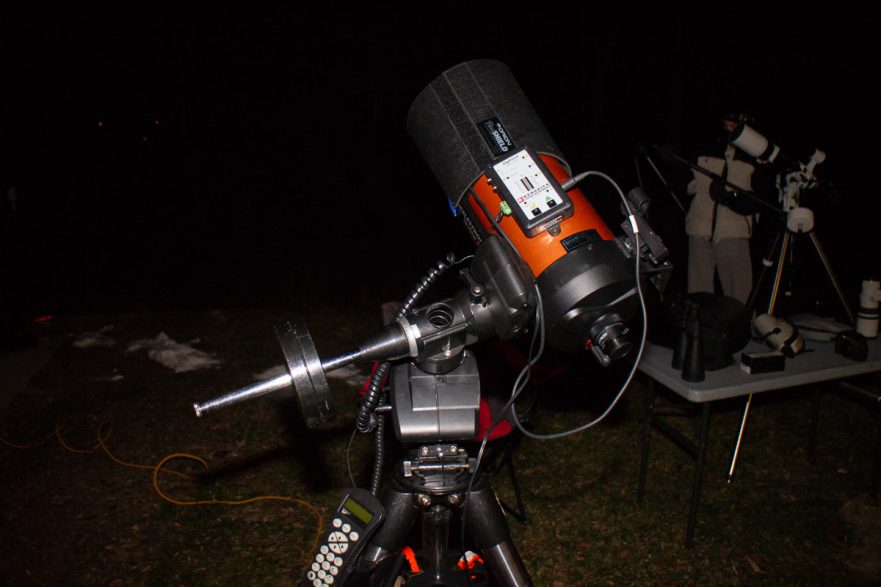 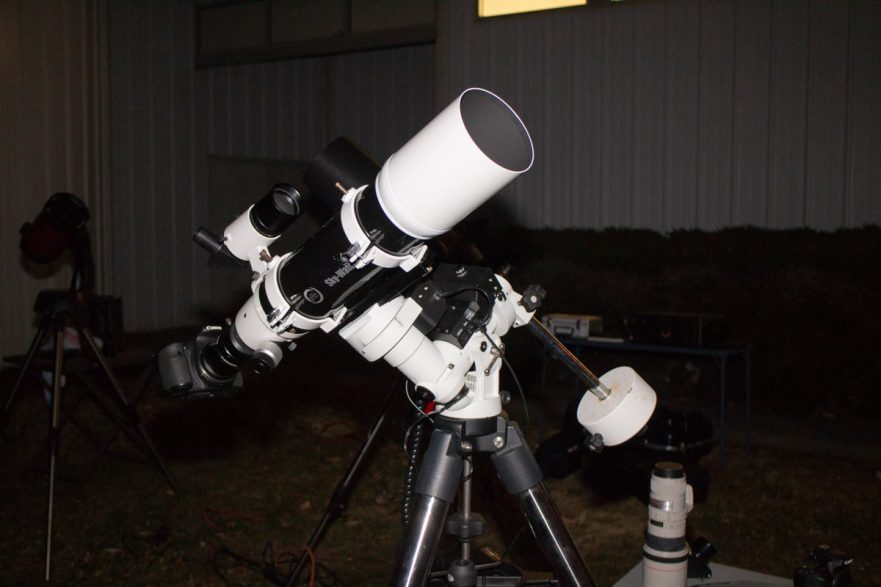 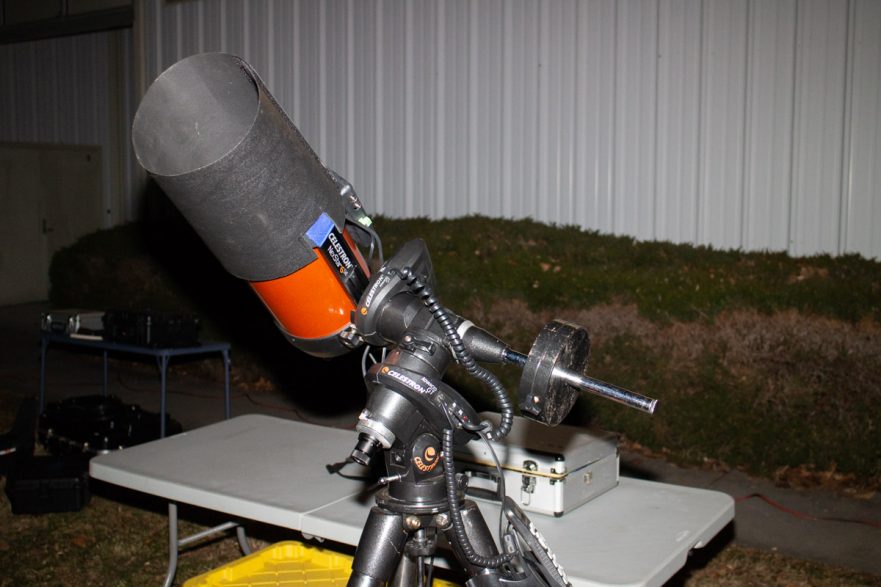 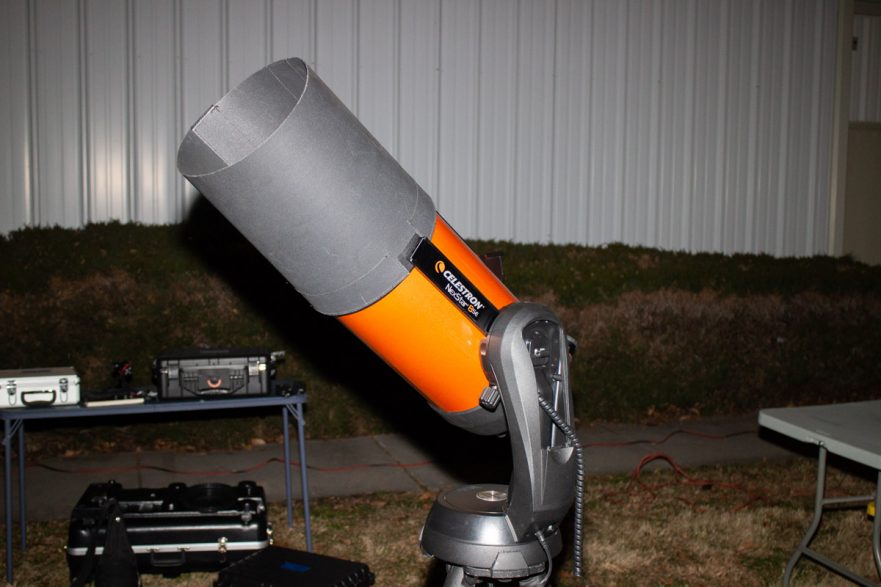 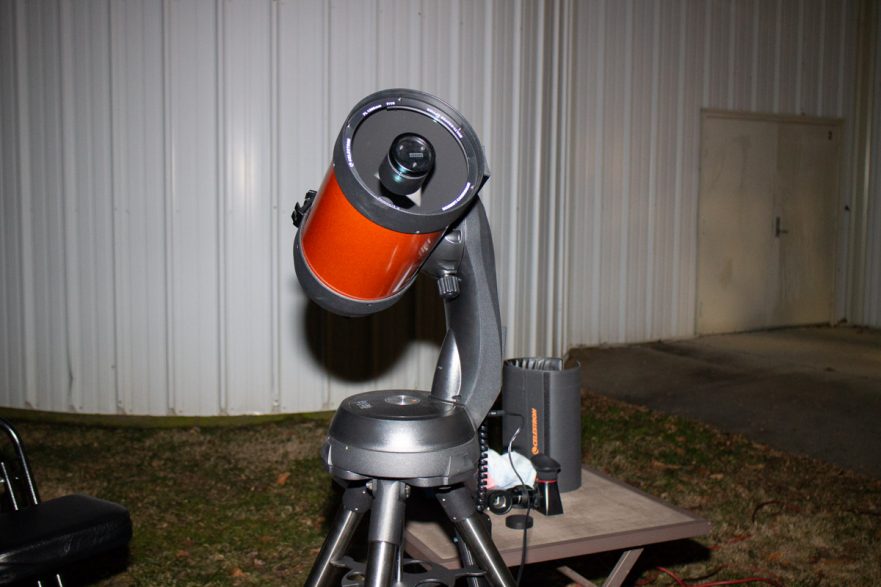 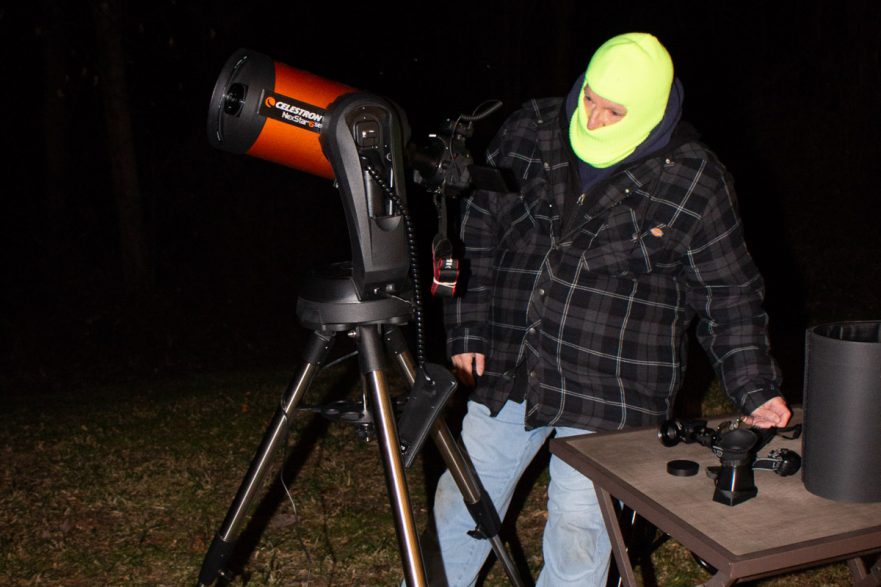 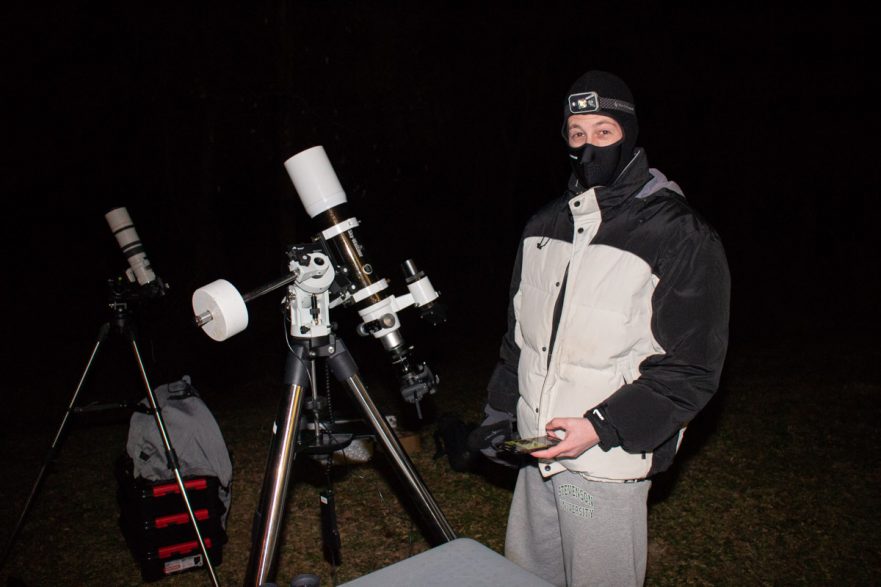 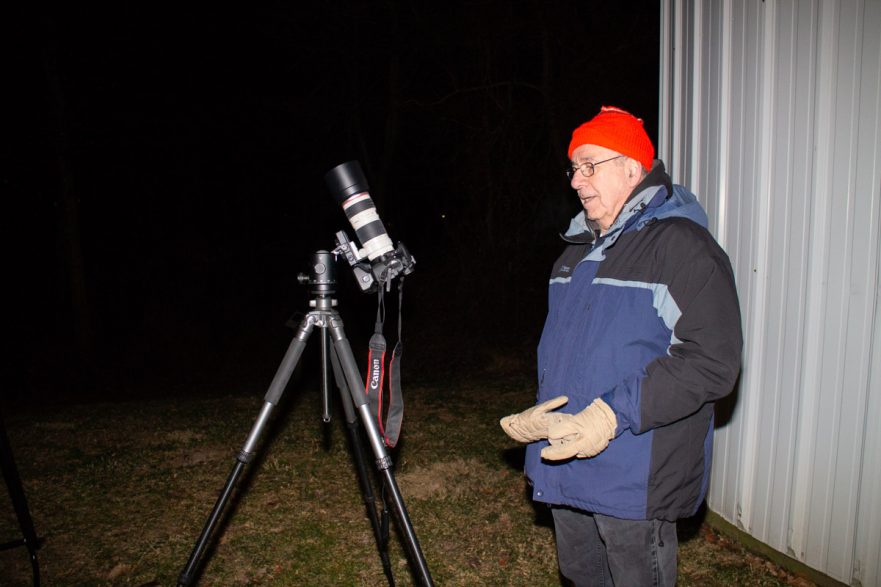 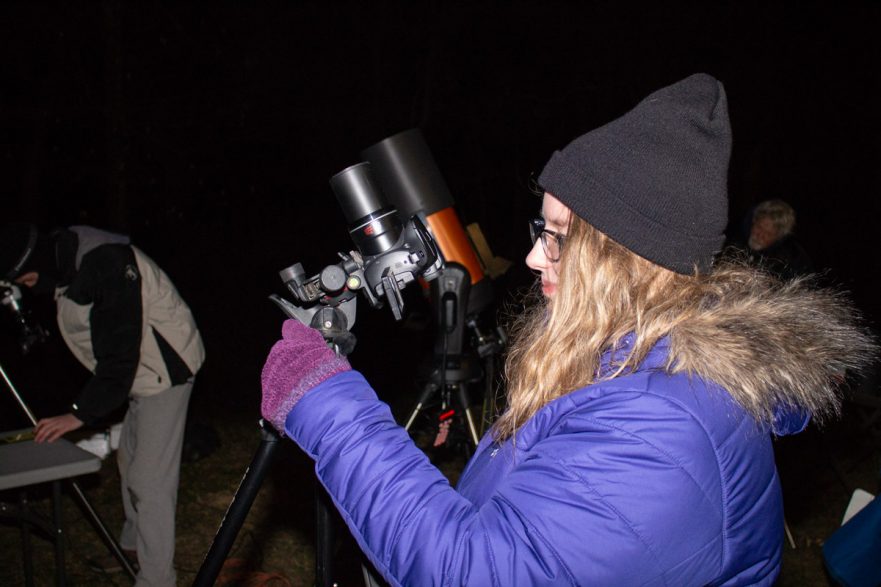 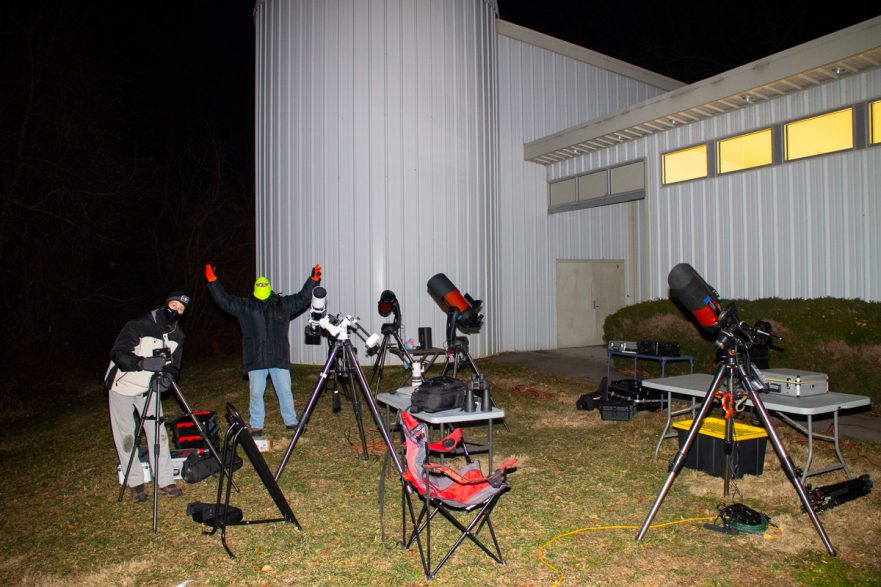 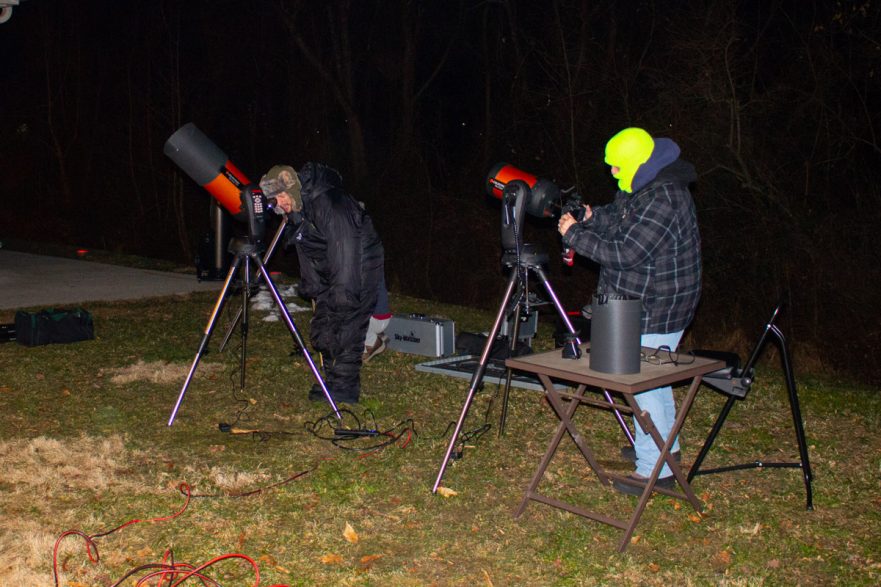 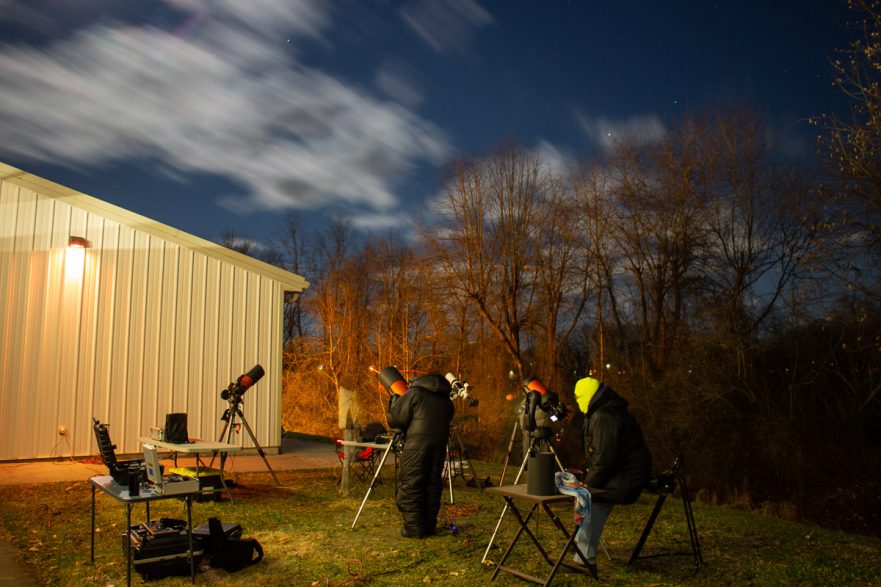 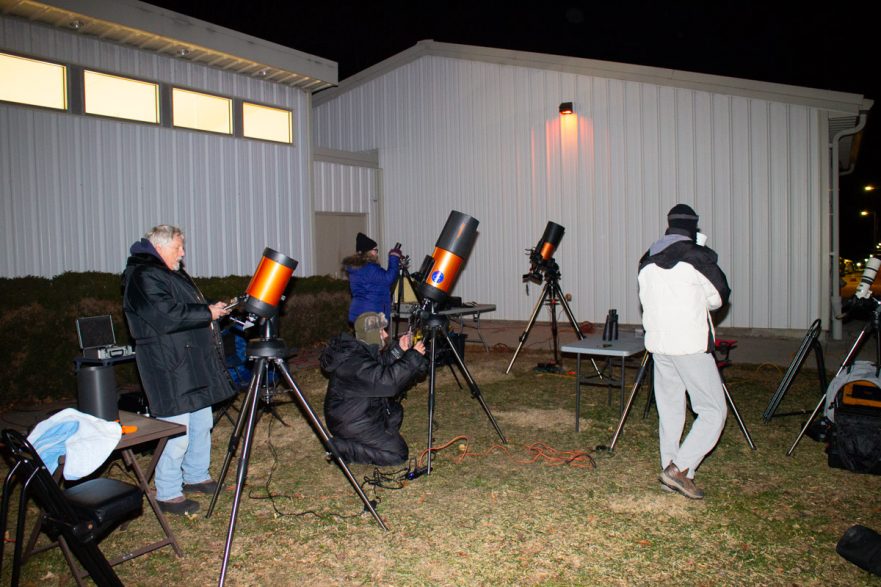 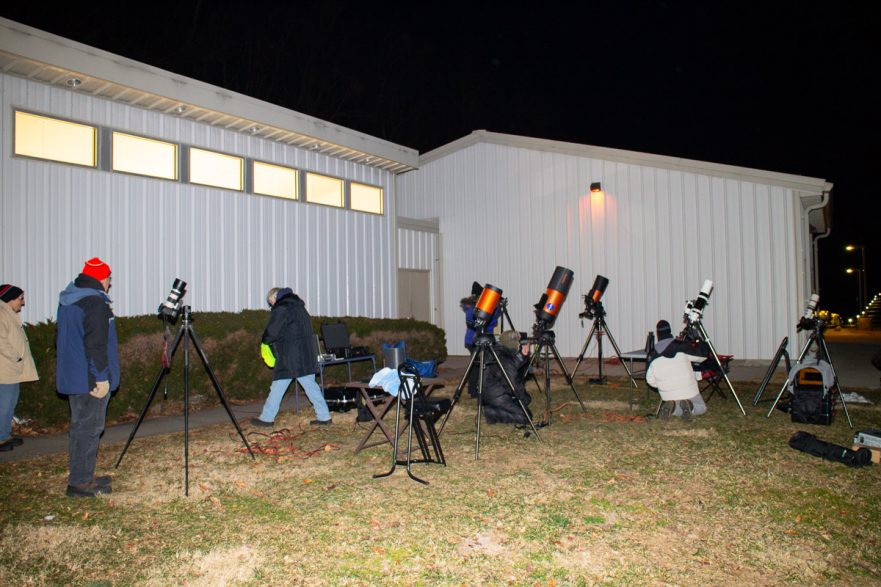 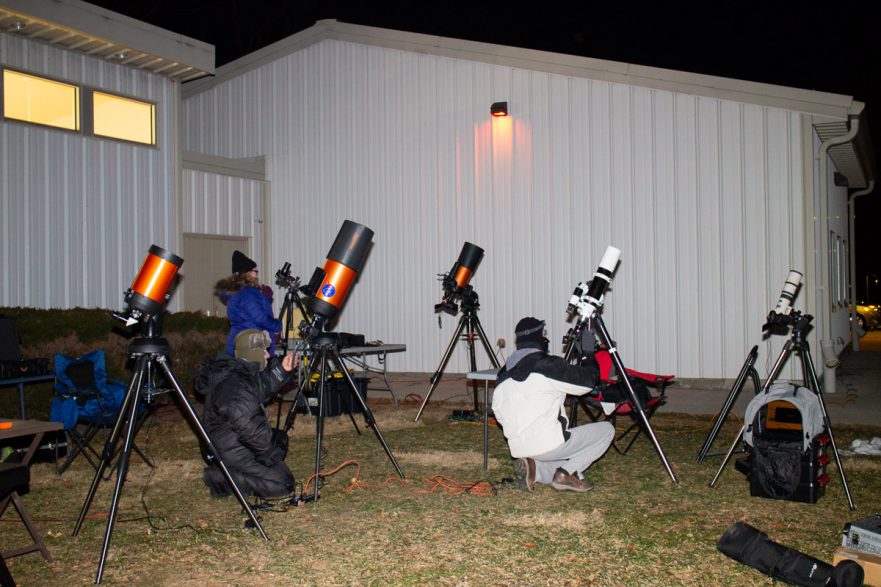 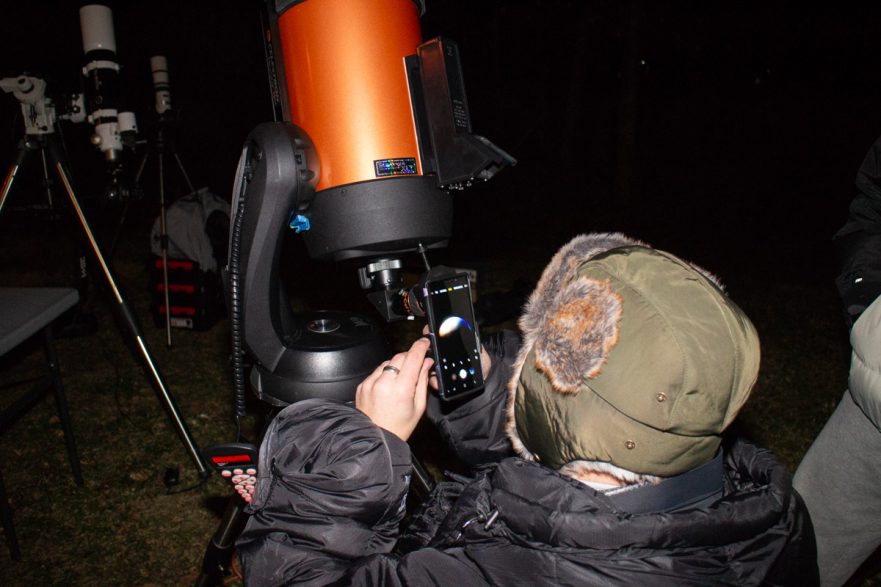 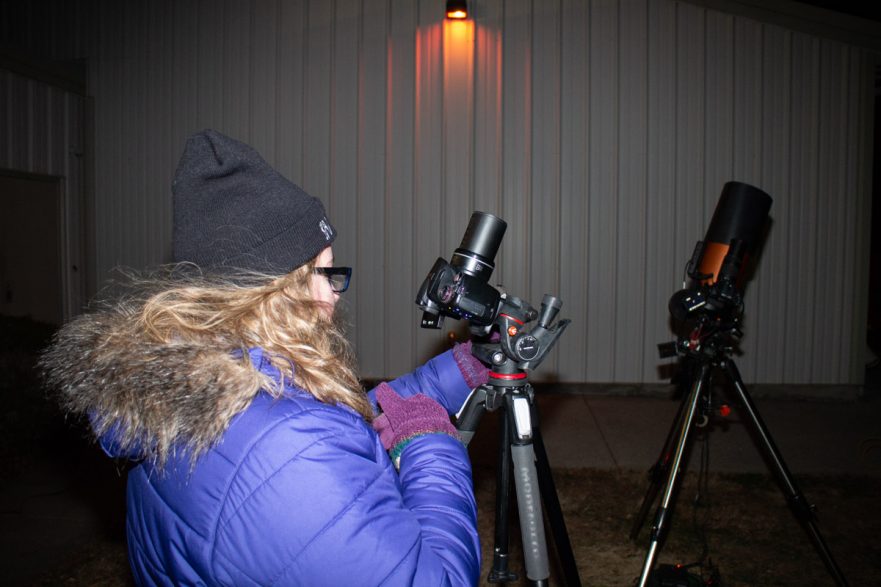 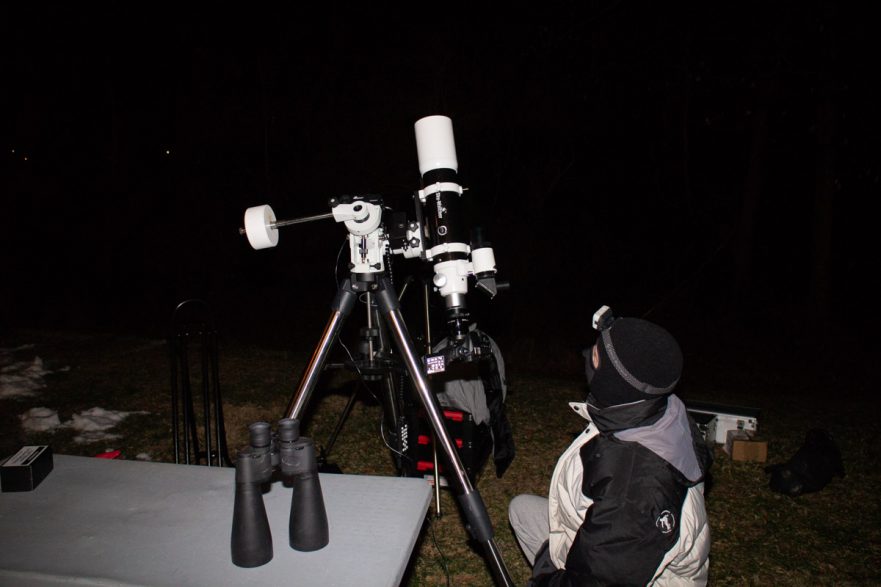